Highlights of Ettela’at newspaper on June 28 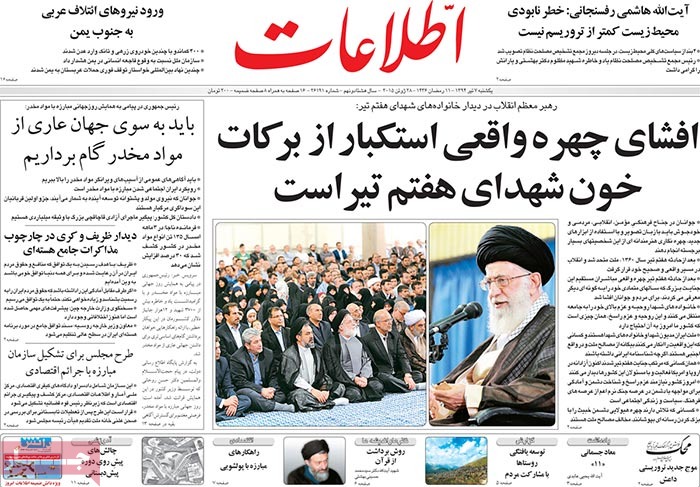 A special look at the headlines Ettela’at newspaper covered on June 28.

♦ “The blood of those who fell martyr on June 28, 1981[during the bombing of the headquarters of the Islamic Republic Party in Tehran] helped reveal the true colors of Arrogant Powers. That was a boon to the nation,” said the Supreme Leader at a meeting with the families of the martyrs.

♦ “The threat posed by environmental degradation is no smaller than the threat of terrorism,” said Ayatollah Akbar Hashemi Rafsanjani.

The chairman of the Expediency Council made the comment as the council voted for four more clauses of the establishment’s environment policies.

♦ Forces of the Arab coalition have crossed the border into southern Yemen.

The UN warned about a humanitarian disaster in Yemen as a number of international institutions appealed for an end to Saudi airstrikes against its neighbor.

♦ “We need to take steps toward to a drugs-free world,” President Rouhani said in a message to a conference to mark International Day against Drug Abuse and Illicit Trafficking.

“We need to raise public awareness about the destructive impact of illicit drugs,” the message further said.

Police Chief Brigadier General Hossein Ashtari told the same conference that his men have seized 135 tons of drugs in the three months to June 21. That was up 30 percent over the corresponding period last year.

It came as the Chinese Foreign Ministry said that great progress has been made in the talks but gaps remained to be bridged.

♦ MPs have put forth a plan to establish an organization to fight corruption.

The motion is to be presented to the chamber’s Presiding Board after the summer recess of the Islamic Consultative Assembly.

♦  Foreign investment in Iran hits $3b in three months