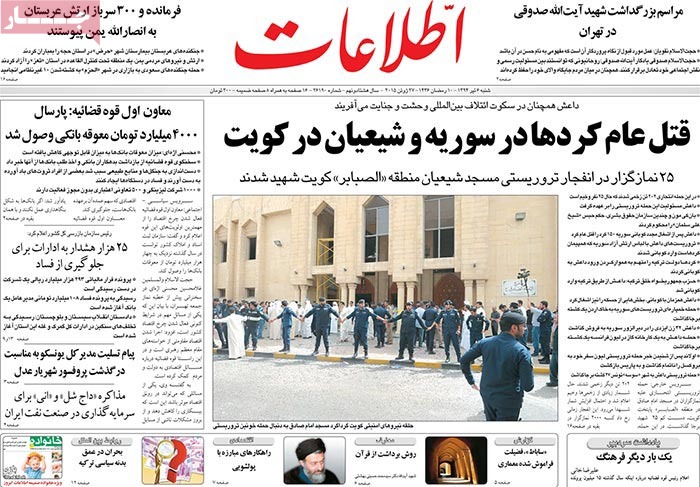 A special look at the headlines Ettela’at newspaper covered on June 27.

♦ The massacre of Kurds in Syria and Shiites in Kuwait

♦ A ceremony has been held in Tehran to commemorate Ayatollah Sadoughi.

Ayatollah Sadoughi, a member of the Constitutional Assembly and Friday prayer leader of Yazd, was martyred in a suicide attack 33 years ago this week.

♦ Some 300 Saudi soldiers and their commander have joined the ranks of Ansarullah in Yemen.

In another development, a Saudi airstrike on Yemen left 10 civilians dead.

♦ “Last year some $1.3 billion in arrears was paid back to banks,” said the deputy judiciary chief.

Mohseni Ejei further said that debts to banks by individuals and entities have registered a remarkable decline.

♦ The inspector general said that various state institutions have been given 25,000 warnings to stem corruption.

♦ [Royal] Dutch Shell and Eni are in talks [with Iranian officials] for investment in Iran’s oil industry.