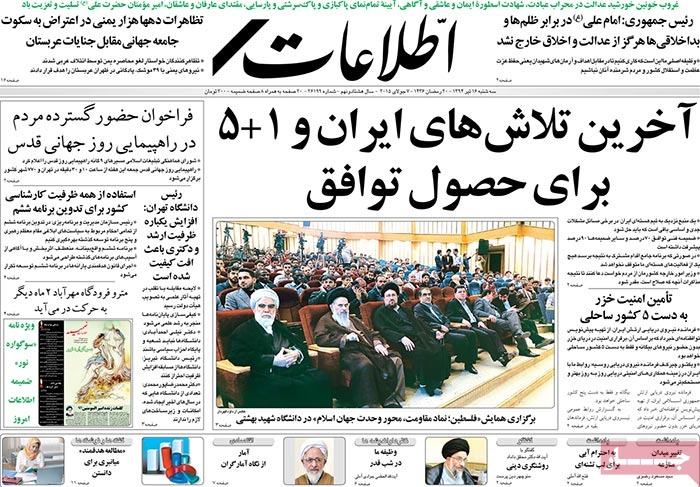 A special look at the headlines Ettela’at newspaper covered on July 7.

♦ The littoral states of the Caspian Sea are to ensure the security of the landlocked sea.

The commander of the Iranian Navy said an agreement is being drafted under which the five countries bordering the Caspian Sea will take charge of Caspian security without foreign presence.

♦ Tehran’s Shahid Beheshti University has hosted a gathering dubbed “Palestine, a symbol of resistance and pivot of Islamic solidarity”.

♦ “Imam Ali [the first Shiite Imam] did not walk off the path of justice and ethics in dealing with oppression and immorality,” said the President.

Hassan Rouhani further said, “Our main responsibility is to make sure that the ideals of the martyrs, that is to say, the integrity and independence of the nation, are guaranteed.”

♦ Tens of thousands of Yemeni people have staged a rally in protest at the silence of the international community in the face of Saudi crimes.

It came as Yemeni forces fired 39 missiles at a Saudi military base in Dhahran.

♦ The public has been urged to take part in Quds Day rallies.

The rallies which get underway at 10:30 will be held in 770 towns and cities across the nation on Friday [July 10].

♦ The country’s expert capacity will be fully tapped in drafting the Sixth Development Plan.

The director of the Management and Planning Organization said that the 6th plan will be realistic, flexible and effective. Efforts will be made to rid the plan of the defects of previous plans.

♦ A sudden increase in master’s and PhD admissions has dealt a blow to the quality of education,” said the President of Tehran University.

♦ Tehran’s subway will be extended to Mehrabad Airport in two months.