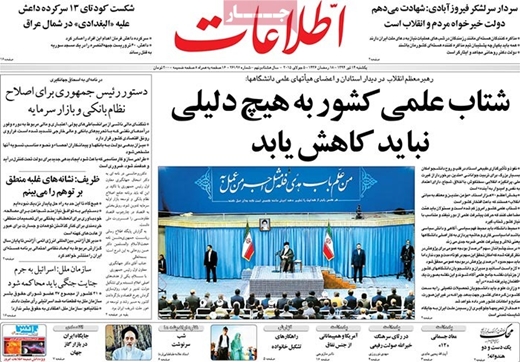 A special look at the headlines Ettela’at newspaper covered on July 5.

♦ “Under no circumstances should the country’s scientific drive lose its momentum,” the Supreme Leader said at a meeting with university professors.

♦ “I swear that this government wishes well for the people and the Revolution,” said Chief of Staff of the armed forces Major General Firuzabadi.

He further said just like soldiers who need the thoughts and prayers of the public as they launch an operation, people should pray for nuclear negotiators.

He also urged the Iranians to throw their weight behind Iran’s nuclear negotiators.

♦ A coup by 13 IS leaders against Al-Baghdadi [the kingpin of the terrorist grouping] has failed.

Al-Baghdadi has ordered the execution of all 13. In another development, 60 terrorists of the Al-Nusra Front were killed by IS in a mosque in Syria.

♦ In a letter to his deputy, President Rouhani has ordered the country’s banking system and capital market overhauled.

The financial problems caused by lack of fiscal and monetary discipline dating back to the time when there was a massive inflow of oil revenues coupled with banking and financial sanctions are standing in the way of economic growth, the president said in the letter.

The top diplomat further said, “We have never been closer to a lasting outcome.”

♦ The United Nations has said that Israel should be tried for war crimes.

Forty-one of the 47 countries with a seat on the UN Human Rights Council voted for an anti-Israeli resolution.