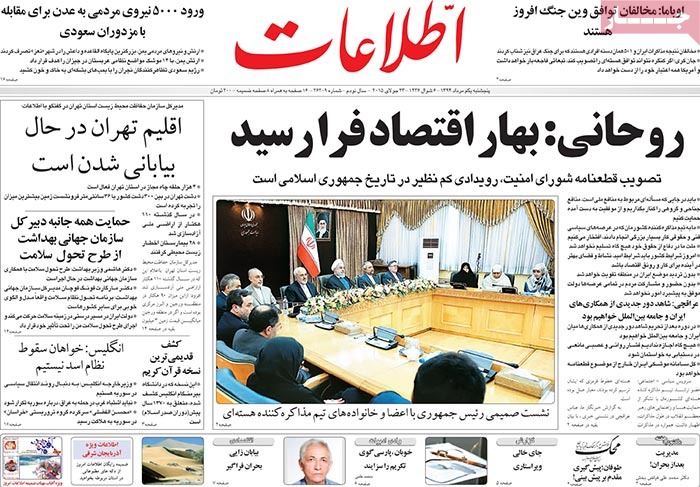 A special look at the headlines Ettela’at newspaper covered on July 23.

♦ “The spring of the Iranian economy has arrived,” President Rouhani said.

♦ The president has held a meeting with members of the nuclear negotiating team and their families.

♦ President Obama has said, “The warmongers are trying to scuttle the Vienna accord”.

He has further said that the same people who are now against the deal Iran and P5+1 struck in Vienna last week are “the same folks who were so quick to go to war in Iraq”.

♦ Some 5,000 popular forces have arrived in Aden to take on Saudi mercenaries.

The Yemeni Army and popular forces have overrun Alqaeda and IS bases in the city of Taiz.

♦ “Tehran is getting desertified,” said the director general of Tehran Environment Protection Department.

♦ The director general of the World Health Organization has thrown her weight behind Iran’s Health Transformation Plan.

The Iranian health minister has said that the plan is being implemented in cooperation with the WHO.

♦ Britain has said that it does not want the downfall of Assad’s government in Syria.

The British foreign secretary has said that London favors political transition in Syria.

♦ The oldest handwritten copy of the holy Koran has been discovered.

The copy found in University of Birmingham dates back to 1,370 years ago.