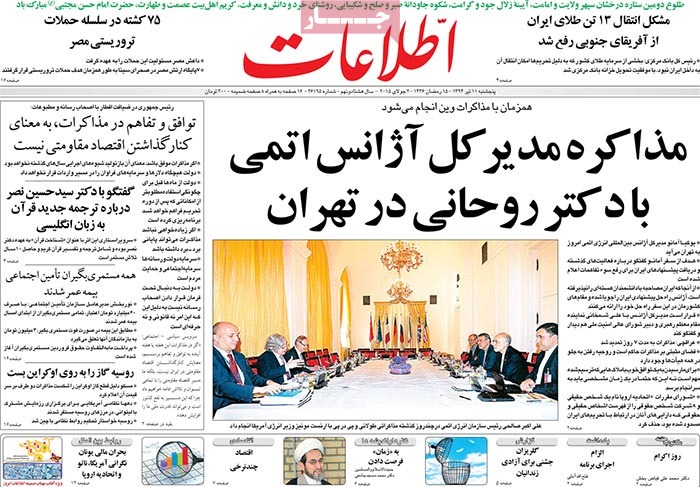 A special look at the headlines Ettela’at newspaper covered on July 2.

♦ The director of the International Atomic Energy Agency will meet in Tehran with Dr. Hassan Rouhani as nuclear talks progress in Vienna.

♦ The problem associated with the return home of 13 tons of Iranian gold has been solved.

The governor of the Central Bank of Iran said that part of the country’s investment overseas – which had proved impossible to return home because of sanctions – has been handed over to the bank.

♦ A spate of terrorist attacks in Egypt left up to 75 people dead.

The Egypt branch of IS terrorist grouping claimed responsibility for the attacks on a military base on the Sinai Peninsula.

♦ “Agreement [with P5+1] does not amount to scrapping Resistance-based Economy,” said President Rouhani at an Iftar [fast-breaking] meeting with representatives of the press.

At the same meeting, the president vowed not to waste the country’s capital on excessive imports.

The translation, which is coupled with exegesis, has taken 10 years to complete.

♦ All Social Security pensioners have been offered life insurance.

The managing director of the Social Security Organization has said that under the new arrangement when an insured individual passes away, their family receive around $1,000.

The decision came after a breakdown in price talks between the two sides.