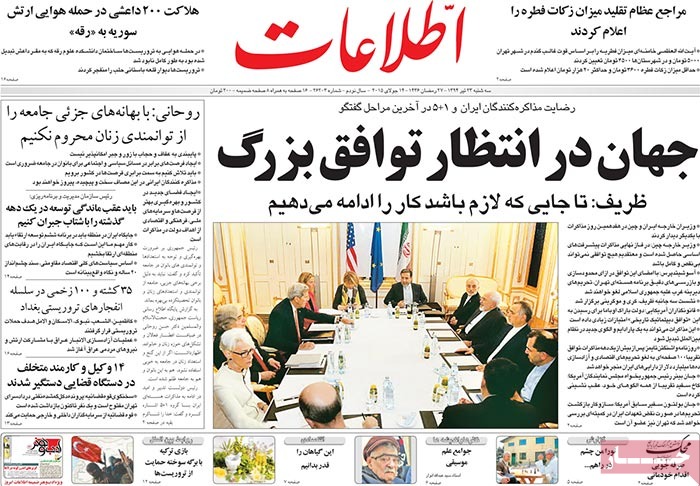 A special look at the headlines Ettela’at newspaper covered on July 14.

♦ The world is anxiously waiting for the grand deal.

♦ Sources of emulation have announced how much each Muslim should donate to the poor to mark the end of the fasting month of Ramadan.

♦ Up to 200 IS terrorists were killed in a Syrian airstrike on Raqqah.

In the air raid, the building of the Faculty of Science, which had turned into the headquarters of the terrorist grouping, was demolished.

♦ “Flimsy excuses should not be cause for depriving society of the capabilities of women,” President Rouhani said.

He went on to say that commitment to hijab and chastity does not come under the gun.

“We need to take steps toward creating equal opportunities [for men and women] in the country,” the president further said.

♦ “We need to make up for the blow the country’s development drive suffered in the past decade,” said the director of the Management and Planning Organization.

“We need to make efforts to improve the regional status of the country during the Sixth Development Plan,” Mohammad Bagher Nobakht further said.

♦ Terrorist attacks in Baghdad have left 35 people dead and 100 others wounded.

It came as a massive operation involving the Iraqi Army and popular forces to liberate Al-Anbar Province got underway.

♦ Fourteen attorneys and judiciary staff members who have acted in violation of rules and regulations have been arrested.

The judiciary spokesman further said that the case involving the missing oil derrick is still under investigation and has resulted in one arrest.