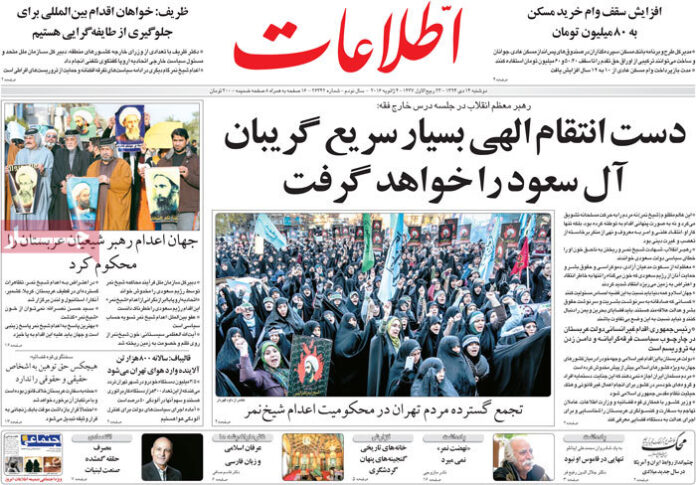 A special look at the headlines Ettela’at newspaper covered on Jan. 4.

Ettela’at:People in Tehran have staged a massive rally in condemnation of the execution of Sheikh Nimr in Saudi Arabia.

Ettela’at:The international community has condemned the execution of the Saudi Shiite leader.

The UN chief described the trial of Sheikh Nimr as flawed.

Ettela’at: The ceiling of the home loans banks will offer has risen to almost $27,000.

The Iranian top diplomat talked over the phone with a number of his regional counterparts, the UN secretary-general and the EU foreign policy chief.

Ettela’at: The mayor of Tehran has said that each year some 800,000 tons of pollutants find their way into the air of the capital.

Ettela’at: The Judiciary spokesman has said that no one is entitled to insult real and legal parties.

He further said attacking the Saudi Embassy was against the law and those who played a role in it will be seriously dealt with.