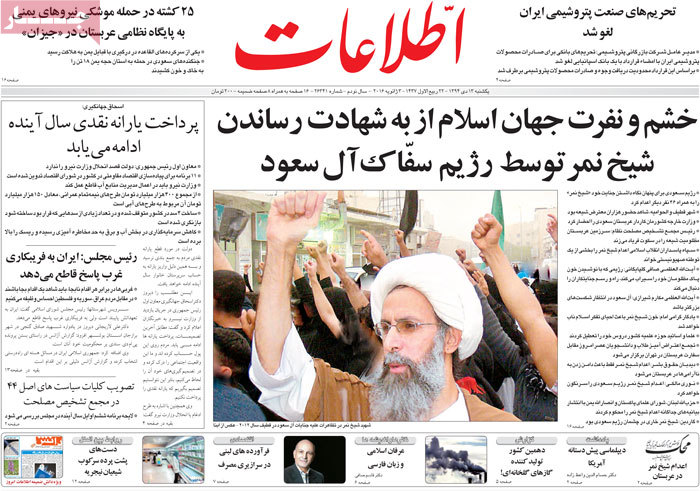 A special look at the headlines Ettela’at newspaper covered on Jan. 3.

Ettela’at: The petrochemical sanctions against Iran have been lifted.

According to the managing director of Iran Petrochemical Commercial Company, conclusion of a deal with a Spanish bank marked the official termination of sanctions.

Ettela’at: A missile attack by Yemeni forces against a Saudi military base in Jizan left 25 dead.

And in another development, a senior Alqaeda official was killed in clashes with Yemeni tribal fighters.

Ettela’at: The first vice-president has said that payment of cash subsidies will continue into next year.

Eshagh Jahangiri further said that the administration has no plans to dissolve the Energy Ministry.

Ettela’at: The parliament speaker has said that Iran will offer a firm response to the West’s deceptiveness.

Ali Larijani said any uncalled-for measure by the West should be met with a fitting response.

Ettela’at: The Expediency Council has approved the general outlines of the policies governing Article 44 of the Constitution [which deals with privatization of state companies].

The council is expected to take up the Sixth Development Plan early next year [starts March 21, 2016].