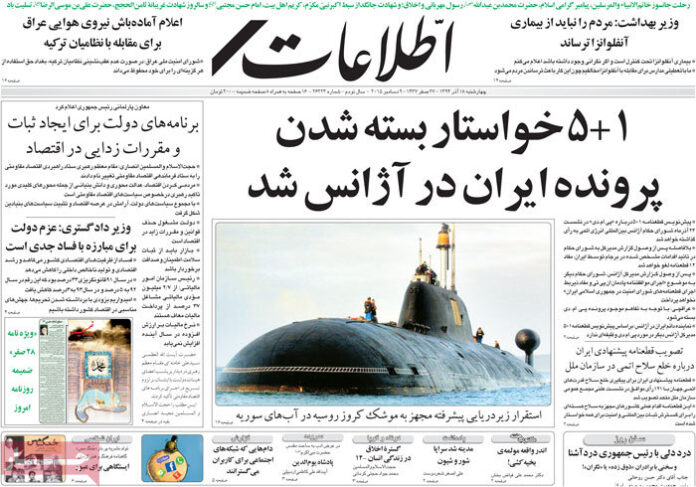 A special look at the headlines Ettela’at newspaper covered on Dec. 9.

Ettela’at: An Iranian-proposed resolution on nuclear disarmament has been adopted at the United Nations.

During an open session of the UN General Assembly, the Iranian-drafted resolution on disarmament of the world’s nuclear powers won 121 votes.

Ettela’at: The health minister has said that the public should not be given the fright because of influenza.

Dr. Hassan Hashemi has also said he is opposed to school closures as a way to counter the flu, because that would frighten citizens.

Ettela’at: The Iraqi Air Force has said that it is ready to take on the Turkish military.

The Iraqi National Security Council has announced Baghdad reserves the right to every option in case the Turkish military fails to withdraw from the Iraqi territory.

Ettela’at: The vice-president for parliamentary affairs has mapped out the government’s plans aimed at deregulation and injection of stability into the national economy.

Ettela’at: The justice minister has said that the administration is determined to take on corruption.

Mostafa Pourmohammadi further said that corruption chips away at the country’s economic potential and pushes down economic growth and GDP.