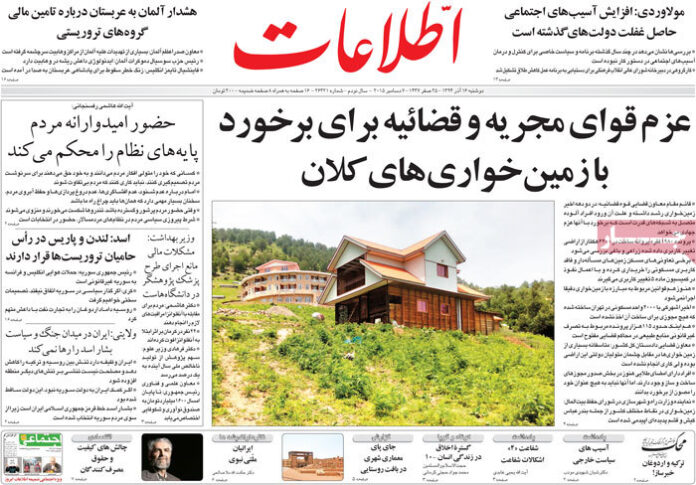 A special look at the headlines Ettela’at newspaper covered on Dec. 7.

♦ The Executive and Judiciary are determined to counter large-scale land grab.

♦ The vice-president for women and family affairs has blamed the negligence of the previous government for the spike in social harms.

Studies suggest over the past few years no plans or policies to curb social harms have been on the agenda.

The German vice-chancellor said many threats against Germany originate from Wahhabist hubs.

♦ A hopeful presence of the public [on the scene] will buttress the foundation of the establishment, said the chairman of the Expediency Council.

Ayatollah Akbar Hashemi Rafsanjani further said that those who view themselves as custodians of the public and thus entitled to deciding their destiny should not take any measure that might render people indifferent.

♦ The health minister has blamed financial problems for failure to implement the so-called researcher physician project in universities.

♦ Assad has said London and Paris top the list of terror sponsors.

The Syrian president said British and French airstrikes on Syria are illegal.

The advisor to the Supreme Leader further said Iran has a duty to ease tensions between Russia and Turkey and that emergence of new tensions on top of those which already exist won’t serve anyone’s interest.