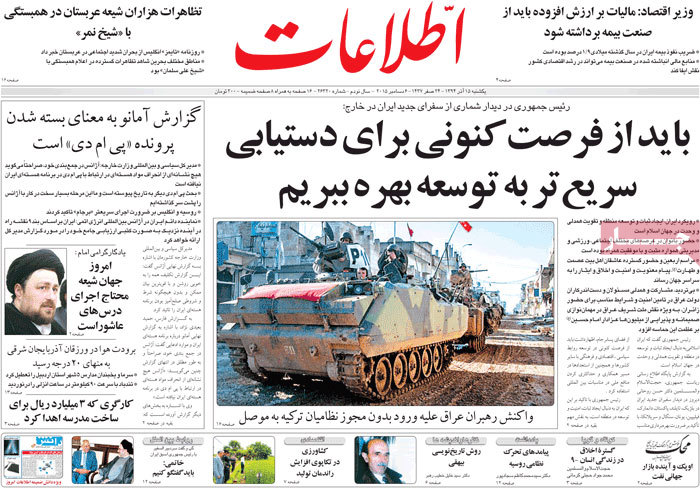 A special look at the headlines Ettela’at newspaper covered on Dec. 6.

♦ The existing opportunity should be seized to secure faster growth, President Rouhani said at a meeting with a number of new Iranian ambassadors before their departure on their missions.

Prime Minister Haider al-Abadi has called for the immediate pullout of Turkish forces from Iraqi soil.

President Fuad Masum has slammed the incursion as flagrant violation of international law.

♦ The economy minister has called for the insurance industry to be exempted from VAT.

He further said that the finances accumulated in the insurance industry can instead play a role in the country’s economic growth.

♦ Thousands of Saudi Shiites have staged a rally in solidarity with Ayatollah Nimr al-Nimr.

And the Times reported that Saudi Arabia is grappling with a simmering social crisis.

♦ The report the IAEA director general has issued on Iran’s nuclear case will translate into the closing of the possible military dimension (PMD) case.

♦ The grandson of the late Imam Khomeini has said that the modern-day Shiism needs to implement the lessons taken away from the uprising of Imam Hussein.

♦ Temperatures have plunged to -20º C in Varzaghan, East Azerbaijan Province.

♦ A worker gave away all the $100,000 he received in inheritance for completion of a school project.