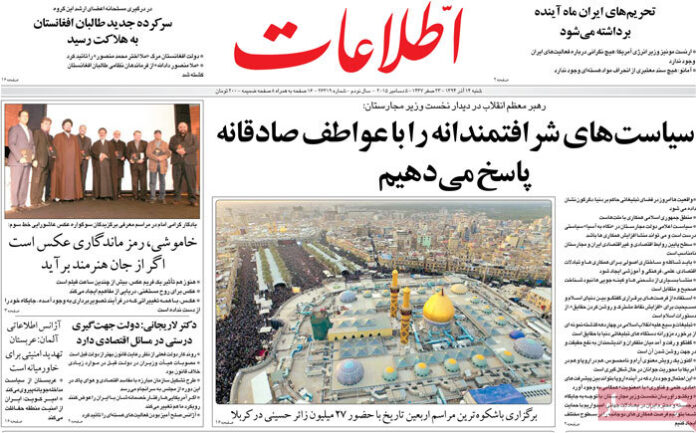 A special look at the headlines Ettela’at newspaper covered on Dec. 5.

♦ We will react to honorable policies with honest emotions, said the Supreme Leader in a meeting with the Hungarian prime minister.

♦ As many as 27 million pilgrims were on hand for the most splendid Arba’een ceremony ever.

♦ Iran sanctions will be terminated next month.

It comes after a report by the IAEA chief suggesting there have been no diversion in Iran’s nuclear program.

♦ The new leader of the Taliban has been killed in a shootout involving senior leaders of the terrorist group.

The Afghan government has confirmed the death of Mullah Akhtar Mansour.

♦ Stillness holds the key to the survival of photos, said the grandson of the late Imam Khomeini at a ceremony to award top Ashura photographers.

He further said if the Americans change their hostile attitude toward Iran, we will change our approach too.

♦ The German intelligence agency has described Saudi Arabia as a threat to the Middle East.

In another development, the Kuwaiti emir said that Iran protects regional security.