Highlights of Ettela’at newspaper on Dec. 1 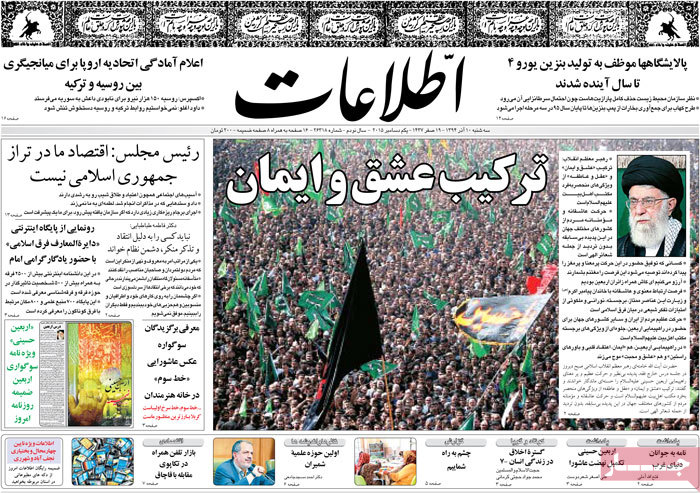 A special look at the headlines Ettela’at newspaper covered on Dec. 1 .

♦ Combination of love and faith

♦ Refineries have been required to produce Euro-4 gasoline by next year.

♦ The European Union has signaled readiness to mediate between Russia and Turkey.

Russia plans to deploy 150,000 troops to Syria to eliminate IS.

♦ The parliament speaker has said that our economy does not live up to the name of the Islamic Republic.

Implementation of the Joint Comprehensive Plan of Action will be a delicate process; if it is done in an organized way, it will amount to progress, Ali Larijani said.

♦ Individuals should not be dismissed as enemies of the establishment simply for making critical comments, said Dr. Fatemeh Tabatabai [the wife of the late son of Imam Khomeini].

♦ The website of the Encyclopedia of Islamic Sects has been launched in a ceremony attended by the grandson of the late Imam Khomeini.

♦ Photographers with best images of Ashura mourning ceremonies have been named.