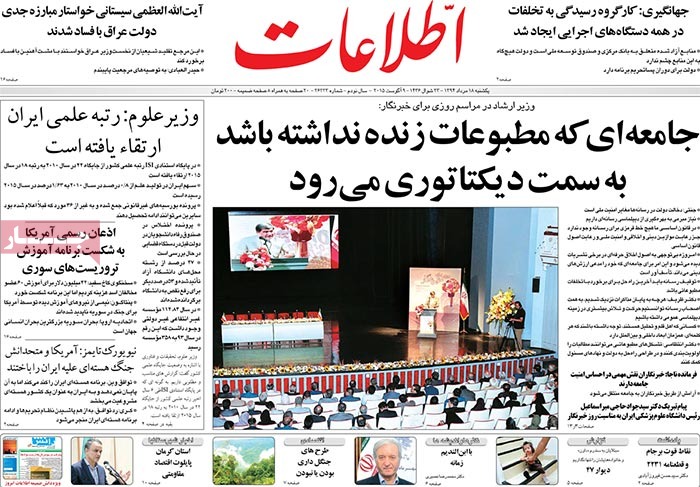 A special look at the headlines Ettela’at newspaper covered on August 9.

♦ “In the absence of lively media, societies drift toward dictatorship,” the minister of culture and Islamic guidance told a ceremony marking Reporter’s Day.

♦ The first vice-president has said that a workgroup has been formed to look into offenses committed in executive bodies.

Eshagh Jahangiri further said that government has worked out plans for the post-sanctions era.

♦ In Iraq Grand Ayatollah Al-Sistani has called for a serious fight against corruption.

Following the appeal by the senior Shiite cleric, the Iraqi prime minister said he would comply with instructions issued by the sources of emulation.

♦ “Iran’s scientific ranking has improved,” said the minister of science, research and technology.

♦ The US has officially admitted that its plan to train Syrian opposition terrorists has failed.

The White House press secretary has said the US spent $42 million on training 60 Syrian opposition fighters, but the plan failed.

♦ The New York Times has reported that the US and its allies have lost the nuclear war to Iran.

The daily has said the Vienna accord slows down Iran’s nuclear program, but does not end it.