Highlights of Ettela’at newspaper on August 8 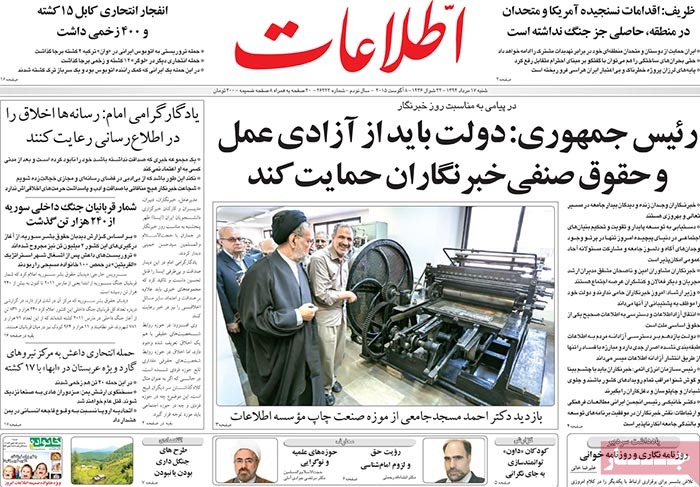 A special look at the headlines Ettela’at newspaper covered on August 8.

♦ “Government has a duty to safeguard journalistic freedom and reporter rights enshrined in the guild charter,” President Rouhani said.

♦ “The uncalculated measures of the US and its allies in the region have resulted in nothing but war,” said Foreign Minister Mohammad Javad Zarif.

The top diplomat further said that dialogue based on mutual respect can be used as a means to settle made-up crises.

♦ A suicide bombing in Kabul left 15 people dead and 400 others wounded.

In another terrorist attack, a bus carrying Iranian tourists came under fire in Turkey.

The Iranian conductor of the bus and a Turkish soldier were killed in the attack.

♦ “Media should uphold ethics in disseminating information,” said the grandson of the founding father of the Islamic Republic.

“The audacity of reporters should not come at the expense of honesty, civility and respect for ethics,” Seyyed Hassan Khomeini further said.

The war, which erupted in March 2011, has left an additional 2 million people injured.

♦ IS has mounted a suicide attack on the headquarters of the Saudi Special Forces in the border town of Abha, killing 17 and wounding 20 others.

Meanwhile a spokesman for the Yemeni army said that mercenaries of the former president would be massacred if they closed in on Sana’a.