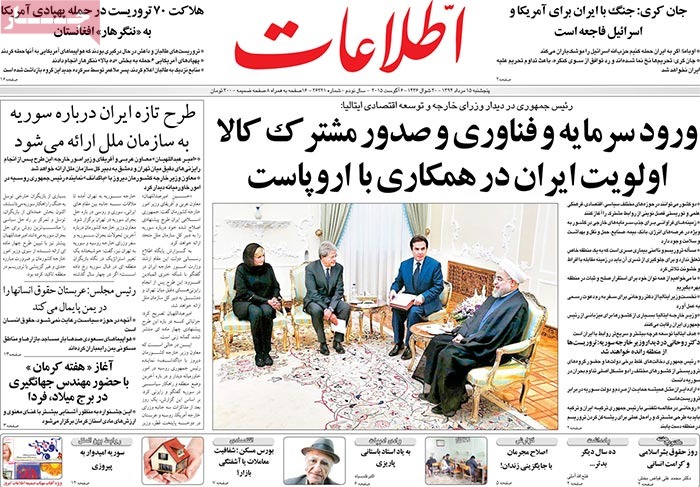 A special look at the headlines Ettela’at newspaper covered on August 6.

♦ “Inflow of capital and technology and joint exports of goods are Iran’s top priority in cooperating with Europe,” President Hassan Rouhani said at a meeting with the visiting Italian ministers of foreign affairs and economic development.

♦ US Secretary of State John Kerry has said that war with Iran would be disastrous for the US and Israel.

The US top diplomat further said that rejection of the Vienna accord by Congress won’t keep the Iran sanctions regime in place.

♦ Seventy terrorists were killed in a US drone strike on Nangarhar, Afghanistan.

Taliban and IS terrorists were locked in a gun battle when they came under fire from the air.

Meanwhile sources close to the Taliban have said that a son of Mullah Omar, the deceased former leader of the group whose death in 2013 was confirmed last week, has been placed under arrest by the new ringleader of this terrorist grouping.

♦ Iran’s new Syria initiative will be presented to the United Nations.

A deputy foreign minister has said that the plan will be put forth after close consultation with Damascus.

♦ The Iranian parliament speaker has said that Saudi Arabia is trampling human rights in Yemen.

♦ A Kerman Week will open in Tehran’s Milad Tower tomorrow with the first vice-president in attendance.

The festival is meant to make members of the public familiar with Kerman and its spiritual and material richness.