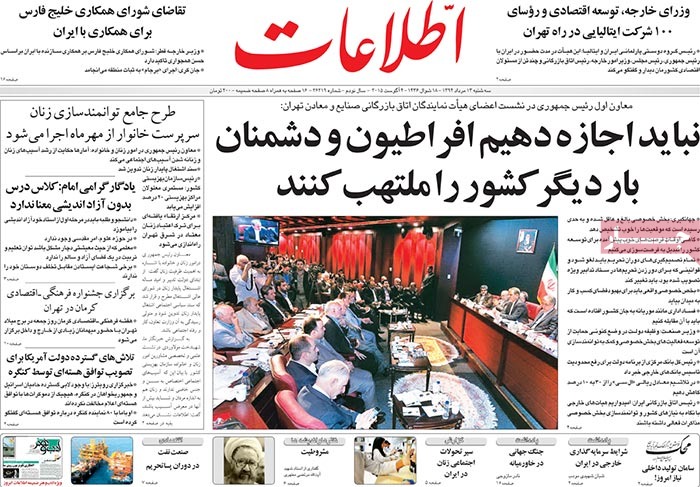 A special look at the headlines Ettela’at newspaper covered on August 4.

♦ “We should not allow hardliners and the enemies to stir things up in the country once again,” said the first vice-president at a meeting with members of Tehran Chamber of Commerce, Industries and Mines.

♦ The Italian ministers of foreign affairs and economic development are to visit Iran at the head of a delegation which also includes the top executives of 100 Italian firms.

During its stay in Tehran the Italian delegation will meet, among others, with the president, parliament speaker, foreign minister and the chairman of the Chamber of Commerce.

♦ The Persian Gulf Cooperation Council [PGCC] has called for cooperation with Iran.

The Qatari foreign minister has said that PGCC favors constructive cooperation with Iran based on the principle of good neighborliness.

♦ A plan to empower women who head families will be implemented as of late September.

The news came after the drafting of a document to create sustainable jobs for women was completed.

♦ The grandson of the late Imam Khomeini has said education loses its meaning in the absence of freethinking.

Seyyed Hassan Khomeini further said university and seminary students should first learn from their teachers how to become a freethinker.

♦ Tehran is to play host to a Kerman cultural and economic festival.

A number of local and foreign guests will attend the festival at the capital’s Milad Tower.

♦ The Obama administration is making extensive efforts to have the Iran nuclear deal approved in Congress.

Despite extensive lobbying by Republicans and supporters of Israel, Democrats on Capitol Hill have not opposed the deal yet.