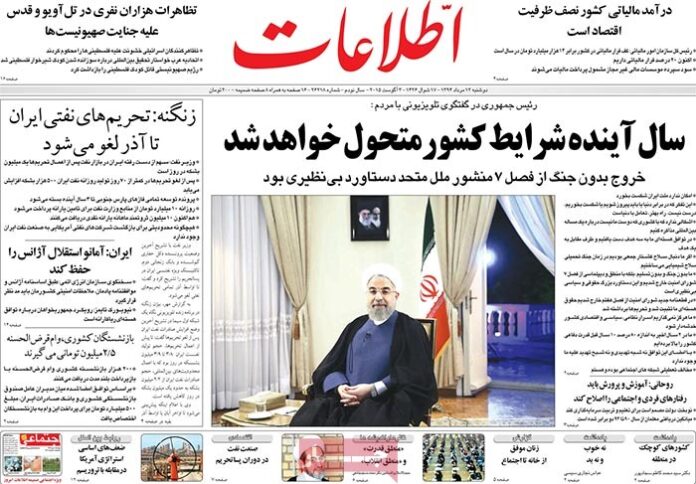 A special look at the headlines Ettela’at newspaper covered on August 3.

♦ “Next year will usher in a transformation in the country,” President Rouhani said in a televised speech.

The government spokesman has said that the Rouhani administration is determined to invest more in education.

The average salary of teachers has doubled between 2011 and 2015.

♦ The country’s tax revenues are half its economic potential.

The director of the National Tax Administration has said that minimum tax evasion stands at around $4.7 billion.

♦ Thousands have staged rallies in Tel Aviv and Beit ul-Muqaddas against Israeli crimes.

The Arab League has called for an international investigation into the burning to death of a Palestinian toddler at the hands of Zionist settlers.

♦ “Oil sanctions against Iran will have been lifted by November,” Oil Minister Bijan Namdar Zanganeh said.

Within 70 days after the sanctions are lifted, Iran’s output will increase by 500,000 barrels a day.

♦ Iran has called on the director general of the International Atomic Energy Agency to maintain the independence of the UN nuclear watchdog.

The spokesman of the Atomic Energy Organization of Iran has said that under the IAEA charter, the country’s security considerations should be taken into account.

♦ Pensioners will be offered more than $800 dollars in interest-free loans.

Under a deal signed by the State Pension Fund and Bank Saderat, around $167 million will be allocated to the loans.