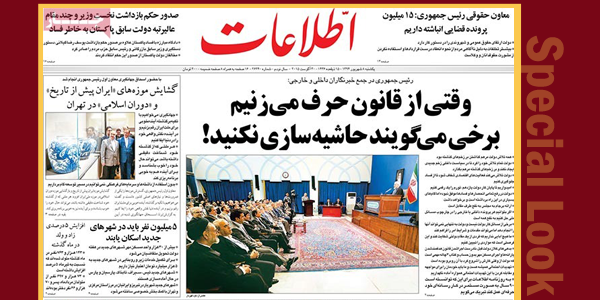 A special look at the headlines Ettela’at newspaper covered on August 30.

♦ “Whenever we talk about compliance with law, some people tell us not to make a fuss!” President Rouhani told a press conference.

♦ The vice-president for legal affairs has said that there are 15 million legal cases that have yet to be heard.

♦ An arrest warrant has been issued for the former Pakistani prime minister and a number of senior officials of the previous government.

♦ Museums on Pre-Islamic Iran and Islamic Period have opened in Tehran.

First Vice-President Eshagh Jahangiri, who was on hand for the inaugural, said government seeks to draw on the past to build a good future for the nation.

♦ Some five million people should settle in new towns.

More than 30,000 apartments in new towns – part of the Mehr affordable housing project – will be delivered to applicants shortly.