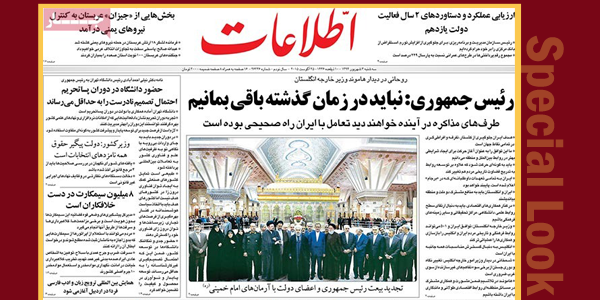 A special look at the headlines Ettela’at newspaper covered on August 25.

♦ “We should not remain stuck in the past,” said President Rouhani at a meeting with visiting British Foreign Secretary Philip Hammond.

♦ The president and his Cabinet have paid a visit to the mausoleum of Imam Khomeini to reaffirm allegiance to the late founder of the Islamic Republic and his ideals.

The visit was timed to coincide with Government Week.

The director of the Management and Planning Organization said that government has banned itself from borrowing money from the Central Bank in a bid to prevent a hike in inflation.

♦ Parts of the Saudi town of Jizan have been captured by Yemeni forces.

[Former Yemeni President] Ali Abdullah Saleh has said that the Saudi-led coalition will pay a price for its aggressions.

♦ “The involvement of universities in post-sanctions decision-making minimizes the risk of wrong decisions,” said the president of the University of Tehran in a letter to President Rouhani.

In the letter, Dr. Nili Ahmadabadi signaled the readiness of Tehran University to cooperate with the government in the post-sanctions era.

♦ The interior minister has said government tries to protect the rights of all electoral candidates.

Abdolreza Rahmani-Fazli further said involvement of oversight bodies in the responsibilities of executive institutions is illegal.

♦ Criminals are in possession of eight million unregistered SIM cards.

A senior official with the judiciary has said that these unregistered SIM cards are being used, among other things, in scams and thefts.