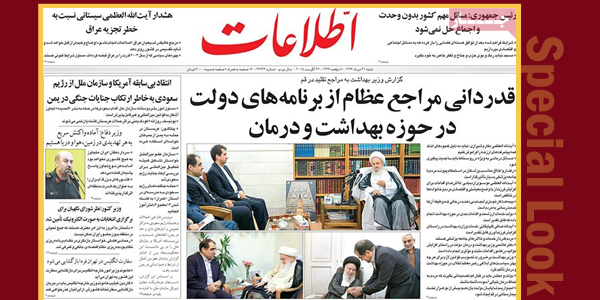 A special look at the headlines Ettela’at newspaper covered on August 22.

♦ Sources of emulation have thanked the Rouhani government for its plans to promote healthcare.

♦ President Rouhani has said that the country’s main problems won’t be settled unless through unity and consensus.

The post-deal era has created a condition for the country to focus on social and economic issues, he further said.

♦ Grand Ayatollah Ali Sistani has warned of the threat of Iraqi disintegration.

The senior Shiite cleric has said that failure to introduce reforms might see things get worse.

UNICEF has said as a result of Saudi airstrikes eight Yemeni children get killed or wounded on a daily basis.

♦ The defense minister has said that the Iranian armed forces are ready to counter any threat on land, in the air or at sea.

Brigadier General Hossein Dehghan said that Iran would not strike first, but our response would make any potential aggressor regret their decision.

♦ The interior minister has said the conditions set by the Guardian Council to hold electronic elections have been met.

He further said that today our enemies admit that in the absence of Iran no major development in the region is possible.

♦ The British Embassy in Tehran would reopen tomorrow.

The British foreign secretary will be on hand for the reopening of the mission.