Highlights of Ettela’at newspaper on August 2 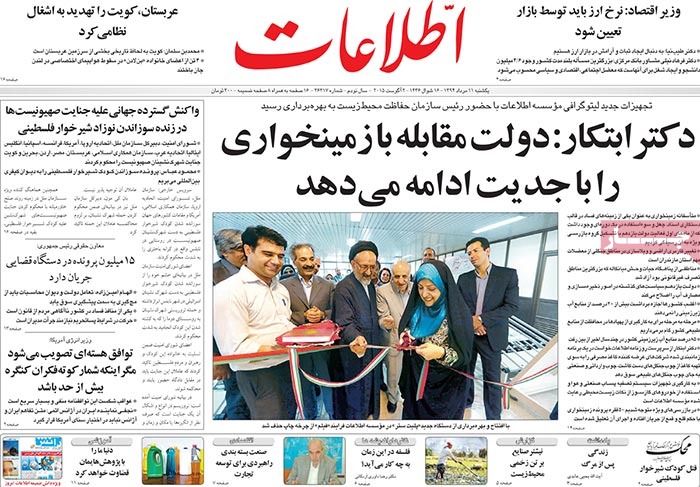 A special look at the headlines Ettela’at newspaper covered on August 2.

♦ “The government is determined to continue to fight land-grab,” Director of the Environment Protection Organization Masoumeh Ebtekar said.

♦ “Market factors should determine the price of foreign currencies,” said the minister of economy and financial affairs.

Dr. Tayyebnia further said that government seeks to inject a sense of calm and stability into the forex market.

♦ Saudi Arabia has threatened to take over Kuwait militarily.

The new Saudi King has said that historically Kuwait has been part of the Saudi territory.

♦ The world has reacted sternly to the Israeli crime of burning a Palestinian toddler to death.

The Palestinian Authority president has threatened to take the case involving the burning alive of the Palestinian child to the International Criminal Court.

♦ “The Judiciary is looking into 15 million legal cases,” said the vice-president for legal affairs.

Elham Aminzadeh further said that interaction between the executive branch and the Supreme Audit Court should focus on prevention rather than catching offenders in the act.

♦ “I remain confident that this agreement [a reference to the Vienna accord] will go into effect, unless there are too many closed minds,” the US energy secretary said.

Earnest Moniz also said that the consequences of failure to implement the nuclear deal would be vast.

Judiciary, Welfare Org. to work together to reduce social harms