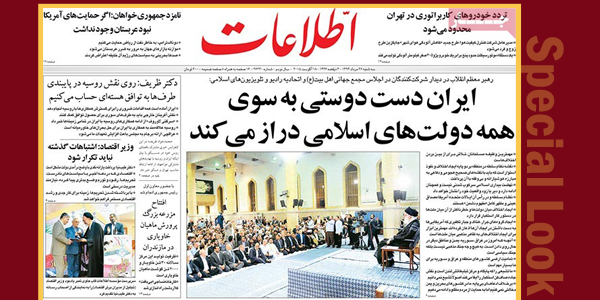 A special look at the headlines Ettela’at newspaper covered on August 18.

♦ “Iran extends a hand of friendship to all Islamic states,” the Supreme Leader said at a meeting with those who participated in the general assembly of an Islamic Radio and Television Union and the AhlulBayt World Assembly in Tehran.

♦ In Tehran, the movement of cars with carburation system will become restricted.

The air pollution caused by a motorcycle is five times that of a brand new Peugeot 405.

♦ US Republican presidential candidate Donald Trump has said, “If it weren’t for us, they [a reference to the Saudis] wouldn’t be here. They wouldn’t exist.”

The top diplomat, who was in Moscow, also signaled Iran’s readiness to take all the necessary measures to expand ties with Moscow.

♦ “The past mistakes should not be repeated,” said the minister of economy and financial affairs.

♦ A sturgeon fish farm has opened in Mazandaran Province.

The farm, the biggest in the Middle East, is expected to produce more than 30 tons of caviar each year.

♦ The head of Ettela’at Institute has handed a framed stamp to the minister of economy and financial affairs in praise of his services as a top economy manager.