Highlights of Ettela’at newspaper on August 17 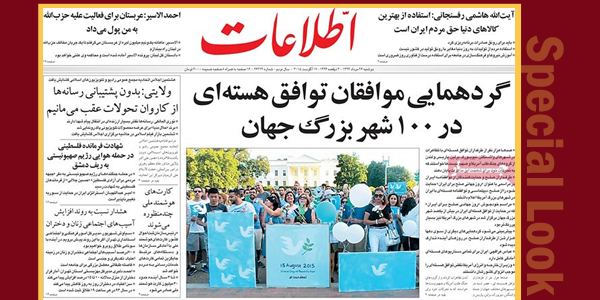 A special look at the headlines Ettela’at newspaper covered on August 17.

♦ Supporters of the Iran nuclear deal hold rallies in 100 cities around the world.

Thousands of ralliers in Washington DC, New York, Berlin, Paris and London called on US hawks and the Zionists to stop their efforts to sabotage the deal.

♦ Ayatollah Hashemi Rafsanjani has said that the Iranians are entitled to using the best products made in the world.

“We need to make plans to promote exports. Making use of up-to-date foreign products does not run counter to efforts to promote local production,” said the chairman of the Expediency Council.

♦ Ahmed Al-Assir, a Salafist Lebanese cleric who was arrested at the airport in Beirut on Saturday, has said that he’s been in the pay of Saudi Arabia to take measures against Hezbollah.

The Lebanese prosecutor general has said the trial of the extremist sheikh will be open.

♦ Ali Akbar Velayati, an aide to the Supreme Leader, has said that without media support, Muslim countries fail to catch up to global developments.

The former foreign minister made the comment at the inaugural of the eighth General Assembly of Islamic Radios and TVs Union in Tehran.

♦ A Palestinian commander has died in an Israeli airstrike against a Syrian city.

In another development, an Iranian deputy foreign minister said Tehran’s support for Syria is immutable.

♦ Warning about growing social harms women and girls are exposed to

A senior cultural official with Tehran Governor’s Office has said if the current trend persists, a divorce tsunami would be around the corner.

The new card will replace electronic cards citizens use to receive a variety of services.