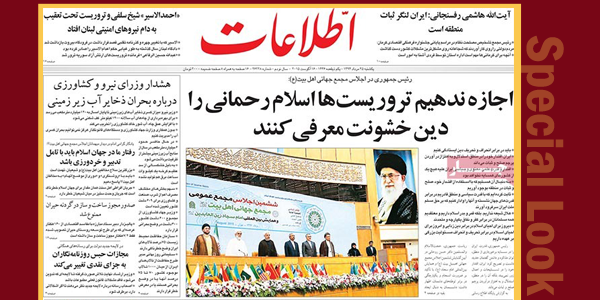 A special look at the headlines Ettela’at newspaper covered on August 16.

♦ “Let’s not allow terrorists to paint a violent image of Islam which is the religion of compassion,” said President Rouhani at the inaugural of a 6th General Assembly of the AhlulBayt World Assembly in Tehran Saturday.

♦ Chairman of the Expediency Council Ayatollah Akbar Hashemi Rafsanjani has described Iran as the anchor of stability in the region.

Speaking at the closing session of the Kerman Cultural and Economic Festival, the top councilor said two years ago the Iranian people voted into office a government which bravely takes on the toughest problems of the country.

Al-Assir, who had been sentenced to death in absentia, was traveling on a fake passport.

♦ The ministers of energy and agriculture have issued a warning about a groundwater crisis.

The energy minister said the water scarcity crisis won’t be managed unless the Ministry of Agriculture Jihad and lawmaking bodies intervene.

♦ “Our demeanor in the world of Islam should be in line with the principles of prudence and judiciousness,” the grandson of the late Imam Khomeini said.

Seyyed Hassan Khomeini further said that Sunni extremists pose as much threat to the world of Islam as Shiites opposed to intra-faith unity.

♦ Authorities are not allowed to issue construction permits to developers in and around Heyran village.

♦ Under a government-drafted bill, prison terms would be replaced with fines in cases involving journalists.