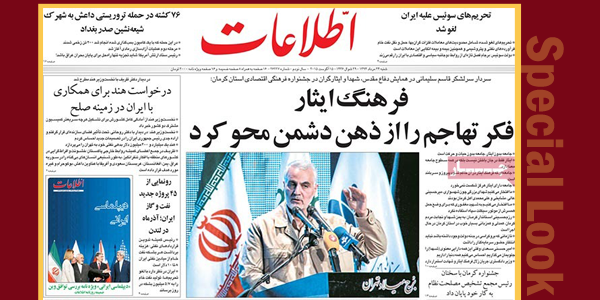 A special look at the headlines Ettela’at newspaper covered on August 15.

♦ “The culture of self-sacrifice forced the enemy to put the idea of aggression [against Iran] out of its mind,” Major General Ghasem Soleimani told a gathering on Sacred Defense, Martyrs and War Veterans in Kerman. The commander of the Quds Force of the Islamic Revolution Guard Corps further said that a society in which the culture of self-sacrifice prevails is always victorious and can hold its head up high.

♦ A speech by Chairman of the Expediency Council Ayatollah Akbar Hashemi Rafsanjani has brought Kerman’s Economic and Cultural Festival to an end.

♦ Switzerland has lifted its sanctions against Iran. The Swiss government has said that the Joint Comprehensive Plan of Action opens a new chapter in political and economic ties with Iran.

♦ A truck bomb attack by IS terrorists in Baghdad’s Sadr City has left 76 people dead and 200 others injured. It came as a second stage of an operation to wrest control of Ramadi from IS militants got underway.

♦ India has asked Iran to cooperate with it in promoting peace. The appeal came at a meeting between Iranian Foreign Minister Mohammad Javad Zarif and Indian Prime Minister Narendra Modi. In another development, India is to pay its $1.4 billion oil debt to Iran. Ettela’at: Forty-five Iranian oil and gas projects will be unveiled in London later this year. A senior Oil Ministry official has said that Iran seeks to raise its crude output to 5.7 million barrels in the post-sanctions era.