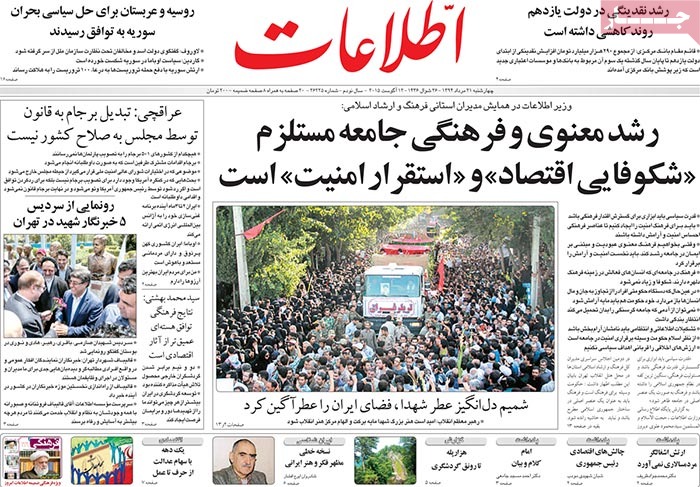 A special look at the headlines Ettela’at newspaper covered on August 12.

♦ “The cultural and spiritual growth of society requires economic boom and security,” the intelligence minister told a gathering of provincial culture official.

♦ The scent of martyrs once again filled the air across Iran as funeral processions were held for unknown martyrs of the Sacred Defense [the Iran-Iraq war in the 1980s].

The Supreme Leader expressed hope the artfulness of the martyrs brings blessing to the nation and inspiration to the revolutionary art center.

♦ The liquidity growth has had a downward trend ever since the 11th government took office.

♦ Russia and Saudi Arabia have reached an agreement over a political solution to Syria’s crisis.

The Russian foreign minister has called for resumption of talks between the Syrian government and the opposition under the auspices of the United Nations.

He further said that P5+1 won’t have their parliaments turn the Vienna accord into legislation either.

♦ The statuettes of five martyred reporters have been unveiled in a Tehran park.

At the ceremony, Tehran Mayor Mohammad Bagher Ghalibaf said the country’s first Reporters’ Museum will be launched in months.

♦ “The cultural results of the nuclear deal outweigh its economic impact,” said Seyyed Mohammad Beheshti, the director of the Cultural Heritage and Tourism Research Center.

He credited the efforts of the negotiating team for a 250 percent increase in the number of foreign tourists visiting Iran.