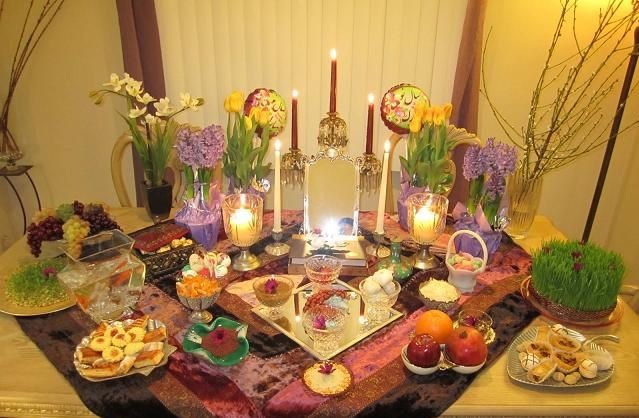 A time-honored tradition associated with Nowruz [which means New Day in Farsi] is preparing Haft-Seen.

Each year as Persian New Year approaches, Iranians prepare themselves to heartily welcome the transition of the season and usher in the New Year which usually falls on March 21. In the run-up to Nowruz everybody is in a festive mood; shops teem with people who try to pick up good bargains; and there is frenzy everywhere.Women give a face-lift to their houses, working against the clock to embrace the spring with cleanliness and freshness. 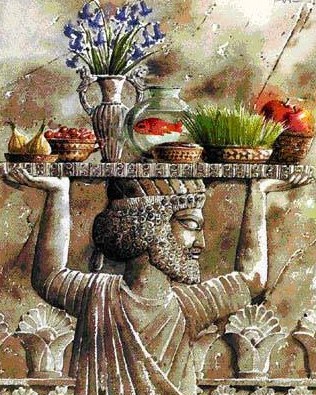 A time-honored tradition associated with Nowruz [which means New Day in Farsi] is preparing Haft Seen.

Haft Seen, Persian for “Seven S’s” – refers to seven items whose names start with S in Farsi – which are placed on a table along with other things as part of Iranian New Year tradition.

In the past, the items were laid on a piece of cloth, spread on the floor, around which family members would sit while dressed in their best clothes, waiting eagerly for New Year to be ringed in.

The following are the Haft Seen items and their symbolic meanings:

Sprouted wheat (Sabzeh): Iranian women or those in the family who have a green thumb usually take the responsibility of growing wheat, barley, lentils or mung beans in a dish in mid- March. Sabzeh whose green appearance is a reminder of nature symbolizes rebirth, renewal and growth after leaving behind a period of inaction in the winter.

Samanu: It’s a thick brownish dish made from germinated wheat. This sweet and nutritious paste whose preparation might take up to a week is a symbol of affluence.

Vinegar (Serkeh): It is a symbol of patience and longevity because in the past it was produced through a slow fermentation process.

Garlic (Sir): Garlics which have therapeutic value symbolize medicine and are believed to keep evil spirits and bad omens away.

Sumac (Sumagh): This reddish-purple powder, used as a spice in Middle Eastern cuisine to add a lemony taste to meat and salads, symbolizes the color of sunrise and the triumph of good over evil. It is also believed to be the spice of life.

In case the items mentioned above are not at hand, other things can be used as replacements.

For instance, coins (Sekeh), which represent wealth and prosperity, or hyacinth (Sonbol), a bulbous flowering plant grown in the spring can be used if the number of items starting with “S” on the spread of Haft Seen falls short of seven.

Although the presence of items whose first letter is “S” in Persian is a must, Haft Seen won’t be complete without some other items. One such thing is goldfish in a bowl representing life. Another thing is a candle which is a sign of enlightenment. Sometimes a floating candle in a bowl of water, which in turn represents purity, is placed on the Haft Seen cloth.

Also placed on the spread are the following: painted eggs which symbolize fertility; a mirror, a symbol of sky and honesty; the holy Koran – to ask God for more blessing in the coming year; and a poetry book of Hafez [a prominent Persian poet] by which people ask for guidance and advice through bibliomancy at the turn of the year.

Different types of tasty pastries, sweets as well as nuts and other fruit are also put on the table, so after the coming of the New Year and exchanging gifts, all those sitting around the Haft Seen spread can dig in.

The Haft Seen table is usually cleared 13 days into the New Year when families spend a day out in the open. On this day, families take their Sabzeh out to nature and throw it into rivers. It’s believed that Sabzeh will take ill fate, pain and disease away from families in the New Year.