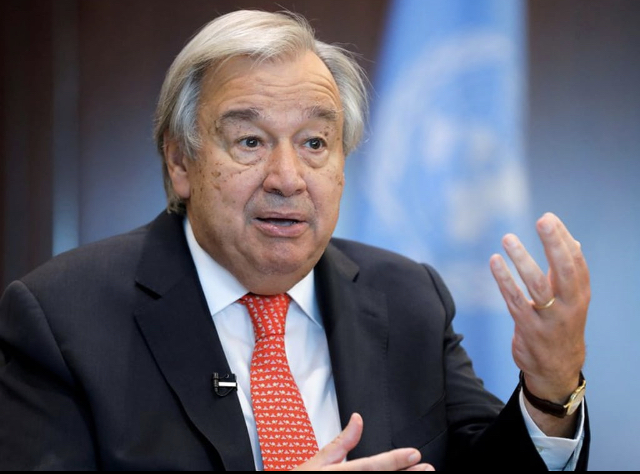 UN Secretary-General Antonio Guterres has condemned Moscow's recognition of the "independence" of the two breakaway Ukrainian regions. He has called on Russia to fully comply with the global body's charter.

“The principles of the UN Charter are not an a la carte menu…. Member States have accepted them all and they must apply them all,” Guterres told reporters.

The secretary-general called Russia’s recognition of “the so-called ‘independence'” of two eastern Ukraine regions “a violation of the territorial integrity and sovereignty of Ukraine.”

“It is a death blow to the Minsk Agreements endorsed by the Security Council,” the UN chief added, referring to a 2014 deal seeking a peaceful resolution to the conflict in eastern Ukraine.

Russian President Vladimir Putin had also announced Monday that the military would mount a “peacekeeping” mission in the territories in Ukraine’s Donbas region that are already under control of Russian-backed separatists.

Guterres blasted the move as a “perversion of the concept of peacekeeping.”

“When troops of one country enter the territory of another country without its consent, they are not impartial peacekeepers. They are not peacekeepers at all,” he said, calling for an immediate ceasefire and a “return to the path of dialogue and negotiations.”

On Tuesday, US President Joe Biden announced what he called the “first tranche” of sanctions against Russia, including steps to starve the country of financing, saying Moscow had started an invasion of Ukraine.

Ukrainian Foreign Minister Dmytro Kuleba has also welcomed the US sanctions against Russian banks on Tuesday, calling on the world to use “all its economic might to punish Russia”.

Speaking alongside Secretary of State Antony Blinken, Kuleba accused Putin of killing the Minsk Agreement that aimed to restore peace in eastern Ukraine by recognising the independence of two breakaway Ukrainian regions.

“Russia’s move is a grave breach of international law and a new act of aggression against Ukraine’s sovereignty and territorial integrity. Therefore, Ukraine strongly believes that the time for sanctions is now,” he added.

Kuleba said Putin can still be stopped if Ukraine and its allies “act in a very reserved way and keep mounting pressure on” the Russian leader.

Blinken has also called off an upcoming meeting with his Russian counterpart Sergey Lavrov, previously planned for Thursday, saying that Washington will not allow Moscow to “claim the pretense of diplomacy” while escalating the crisis.

“Now that we see the invasion is beginning, and Russia has made clear its wholesale rejection of diplomacy, it does not make sense to go forward with that meeting at this time,” Blinken noted.

Blinken has also accused Putin of aiming to “destroy Ukraine’s democracy” and control the country and its people.

“This is the greatest threat to security in Europe since World War II,” Blinken continued, adding, “Ukraine is in danger. President Putin is blatantly and violently breaking the laws and principles that have kept the peace across Europe and around the world for decades.”

Blinken said the two Russian banks targeted by US sanctions on Tuesday, VEB and PSB, hold more than $80bn in assets.

“These measures will freeze their assets in the United States, prohibit American individuals or businesses from doing any transactions with them, shut them out of the global financial system and foreclose access to the US dollar,” he stated.

Moscow’s ambassador to the United States has hit back at the imposition of sanctions on Russia by the US, suggesting the move would hurt global financial and energy markets as well as ordinary citizens.