Good progress made over removal of anti-Iran sanctions in Iran N-talks: Iranian official 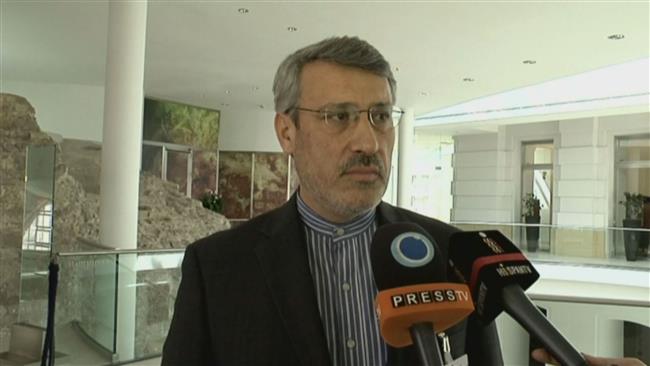 Hamid Baidinejad also said that the idea of foreign access to the country’s military sites has never been on the agenda of nuclear negotiations between Iran and P5+1.

A senior Iranian nuclear negotiator says good progress has been made on the issue of the removal of the anti-Iran sanctions during nuclear talks between the Islamic Republic and the P5+1, Press TV reports.

Hamid Baidinejad, who is also the director general for political and international affairs at Iran’s Foreign Ministry, made the remark in an exclusive interview with Press TV in the Austrian capital, Vienna, on Friday.

He did not provide specifics.

Baidinejad, who has been in Vienna for talks with the P5+1, is now heading to the Swiss city of Geneva to join Iranian Foreign Minister Mohammad Javad Zarif and other members of the Iranian nuclear negotiating team for the continuation of the talks there.

During the interview, he also said that the idea of foreign access to the country’s military sites has never been on the agenda of negotiations between the Islamic Republic and six world powers over Iran’s civilian atomic activities.

“In fact, inspection of military installations has never been on agenda in our negotiations. As we have made it very clear, we never accepted that there could be inspections from the military sites in our country,” he said.

“But, there are very clear rules and regulations which are defined within the Additional Protocol, which… define in concrete terms… what are the regulations and conditions that such an access could be requested by the [International Atomic Energy] Agency and what are the rights of the state parties in response to these concerns,” he added.

The senior Iranian official said that Tehran and its negotiating partners are not contemplating an extension of Iran’s nuclear talks beyond the June 30 deadline.

Earlier on Friday, Seyyed Abbas Araqchi, who is Iran’s deputy foreign minister for legal and international affairs, made similar remarks about the issue of visits to Iranian military facilities and interviews with Iranian nuclear scientists.

“We have fully informed the opposite [negotiating] side that this (the issue of inspections and interviews) will never be on the agenda” of the negotiations, he said.

On May 20, Leader of the Islamic Revolution Ayatollah Seyyed Ali Khamenei said Iran will not allow any inspections by foreign countries of its military sites. He also stressed that foreigners will not be permitted to interview Iranian scientists.

Araqchi said the Leader’s remarks are “a decisive and serious guideline” for the Iranian negotiating team.