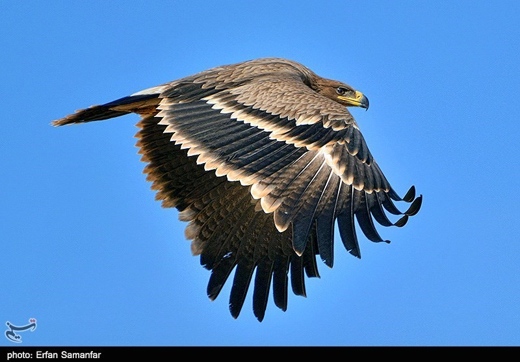 The Golden Eagle which lives in Iran’s mountainous areas does not like human disturbances; when disturbed it leaves the nest.

Among other places in the world the Golden Eagle inhabits the mountainous regions of Iran.

The eagle’s habitat is mainly barren or wooded mountains and highland wooded lakes. That said, it moves to low lands, plains and semi-deserts in heavy winters.

The big bird, whose wing span is 2 m, can lift weights as heavy as 7 kg.

The Golden Eagle feeds primarily on rabbits and hares in Iran, although it can kill large prey such as cranes, young sheep, young ibex and domestic livestock.

Golden Eagles live in their nesting territory all year, but some may migrate due to lack of food during the winter.

They are loyal to their mates during their lifetime. An eagle will usually look for a new mate only if its companion dies.

They stay away from human activity; they live mostly in areas where they can’t be disturbed by people. When they are disturbed, they abandon their nest.

The following are photos Tasnim News Agency put online of the giant birds on January 10: