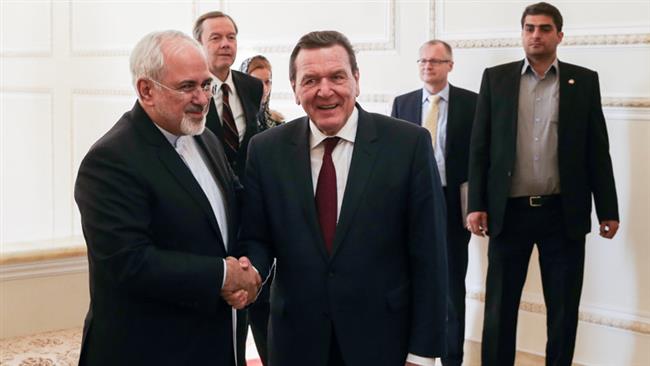 German companies seek to invest in Iran especially in the field of transportation and infrastructure, says former chancellor Gerhard Schroeder.

“German companies are very much interested in investing in the fields of Iran’s transportation and infrastructure,” IRNA quoted Schroeder as telling reporters in Tehran on Monday after a meeting with Iranian Minister of Roads and Urban Development Abbas Akhoundi.

“The presence of German companies in Iran can open a new chapter in the development of economic relations of the two countries,” noted Schroeder who also held talks Monday with other senior officials in Tehran on improving trade ties and regional issues.

Schroeder heads a trade delegation for an unofficial three-day visit to Tehran. The 27-person team is mostly made up of representatives from German companies and the country’s economic sector.

He said although the volume of German investment could not immediately be known, the companies’ interest for business with Tehran heralded a good prospect for the future.

Schroeder is the honorary chairman of NUMOV, the Berlin-based German Near and Middle East Association, which works to boost economic exchange. He is also reportedly due to meet with Minister of Petroleum and President Hassan Rouhani on Tuesday.

The latest visit marks an increase in foreign firms vying over Iran’s lucrative market after the termination of Western sanctions in accordance with the Joint Comprehensive Plan of Action (JCPOA).

Akhoundi referred to “good negotiations” with the German side in the areas of land, sea and air transport as well as infrastructure.

He also said they discussed the financing of Iranian projects by German banks and ways these banks could operate to fund them.

The Islamic Republic’s nearly 80 million population and educated workforce have long been seen as untapped, and its energy sector is considered ripe for deals.

With the fourth-largest oil reserves and the second in gas, Iran has the biggest combined energy deposits in the world.