German Ambassador to Tehran Poses with “Yes to JCPOA” Poster 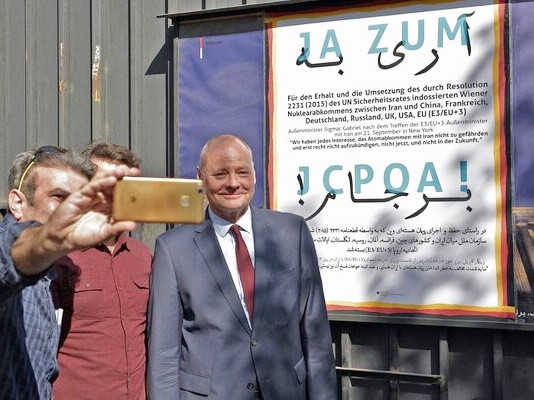 German envoy to Iran says a number of posters bearing the phrase ‘Yes to Iran Nuclear Deal’, which are hung on the wall of German embassy in Tehran, are aimed at announcing that Berlin is doing its best not to let the deal break down.

After posing with a “Yes to JCPOA” poster hung on the wall of the German embassy in Tehran, Ambassador Michael Klor-Berchtold wrote on Twitter:

“With these posters, we want to tell to the Iranian public how much Germany is trying to maintain and implement the nuclear deal.”

According to a Farsi report by Tabnak, the German diplomat emphasized in a message that Germany is one of the six countries that succeeded in ending the disputes over Iran’s nuclear program in 2015, after years of diplomatic efforts.

“This agreement is a clear example of how the complicated international issues could be resolved through negotiations peacefully. Together with France, Britain, the United States, China and Russia, we proved that diplomacy and dialogue are stronger than conflict. Despite the opposition voices heard, Germany still insists on sticking to the deal and implementing it,” said the German ambassador.

He also added that German Foreign Minister Sigmar Gabriel has always emphasized this and reiterated it at the United Nations General Assembly in New York as well.

“Germany’s ambassador to the United States, Peter Wittig, is also taking every opportunity in Washington to outline our positions, and tries to win the favour of others. That’s exactly what I’m doing in Tehran. Our posters confirm our stance and our diplomatic efforts, especially in the last few months and weeks.”

“I believe that more than ever, we need to emphasize dialogue and diplomacy. All the parties to the nuclear deal are responsible for its success and must look at it as a clear example of a peaceful settlement of conflict through dialogue,” noted Klor-Berchtold.

Based on the report, the German embassy in Tehran has produced a series of posters bearing the slogan “Yes to JCPOA”, which is the stance taken by German Foreign Minister Gabriel, ambassador Klor-Berchtold, and German ambassador to the United States Wittig.

The posters are hung on the walls of German embassy in Tehran in the heart of Iranian capital, along with pictures of Germany’s spectacular sceneries.

All the posters bear the following title: “For maintaining and implementation of the deal between Iran, the United States, China, France, Germany, Russia, the UK, and the European Union which is endorsed by the United Nations Security Council Resolution 2231 (2015)”. It also includes the following:

German Foreign Minister Sigmar Gabriel, after the meeting of the P5+1 group of countries with Iran on September 21 said in New York: “We strongly oppose ending the nuclear deal with Iran, and of course we do not want to cancel it, either today or tomorrow.”

Germany’s ambassador to Tehran, Michael Klor-Berchtold, said in Tehran on October 5, 2017: “The JCPOA is a great achievement, and Germany is committed to it. We will do anything we can, to maintain this achievement. We will continue our efforts so that the people of Iran and their families enjoy all the potentials of the deal in their everyday life.”

German Ambassador to the United States, Wittig, stated at the Atlantic Council press conference on ‘Europe and the Nuclear Accord with Iran’ on September 25, 2017 in Washington that: “We are interested and this is in fact our top priority, to see the nuclear pact with Iran is maintained…We believe there are no practical peaceful alternatives to this treaty.”