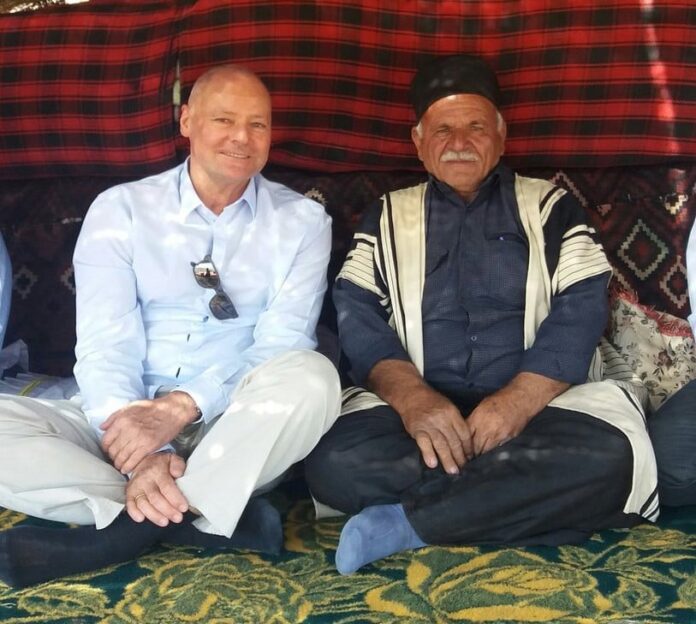 The German ambassador to Tehran has come up with a novel idea to open up a new path in Iran-Germany cooperation in the tourism industry.

Michael Klor-Berchtold decided to spend holidays in Iran in recent weeks, an initiative which came under the media spotlight.

The news that the top German diplomat spent his holidays in Iran received much attention in Germany from media and all those interested in the Iranian culture. Klor-Berchtold accompanied Bahktiari nomads in Zagros mountains during his holidays in the Islamic Republic.

European tourists who cherish the idea of spending holidays in fabulous countries such as Iran are interested to see first-hand the cultures and traditions of different parts of the country. From a tourist’s perspective, a trip should include interesting experiences.

Among the issues which are very important to a tourist is to get familiar with the cuisine, customs, traditions and traditional costumes of certain localities in a country.

One of the main objectives of foreign visitors is to experience new and fantastic environments.

Accordingly, the German ambassador’s decision to spend holidays with nomads has received extensive coverage in his country. From a political and media point of view, too, Klor-Berchtold’s choosing Iran as a holiday destination is a testament to the existence of security in Iran as well as the beauties of this land rarely covered by Western media.

In addition to this news, Der Spiegel published another report on the presence of tourists and foreign travelers in Iran. The German weekly has also published an interview with the spokesperson for the Munich Tour Operator regarding European visitors’ interest in travelling to Iran and surrounding countries.

These are the answers given by the spokesperson to the weekly’s questions.
At a time when some European airlines have cut down the number of their flights, what impact have such moves had on passengers’ needs?
Spokesperson: It is right that this issue has eclipsed Europeans’ trips to Iran. However, when we hear a flight to Tehran is canceled, we offer other options to travelers.

In recent years, many Germans have shown an interest in visiting Iran. Tours of Iran are usually booked by Germans. But now, how has the issued mentioned above affected demand?

Spokesman: Demand has been at a normal level in the recent year. But demand for travelling to Iran had peaked in the years before, especially in 2015. At that time, we had exactly 2650 visitors who had booked tours of Iran. The situation remains the same in 2016, but the figure dropped to 2250 in 2017, which shows a slight drop compared to the two preceding years.

What keeps enthusiasts from spending their holidays in Iran?

Spokesman: The main thing is climatic changes, which have gripped the country for several years now. This has practically made travelling to the country a little difficult. Of course, travelling to certain countries have always been hampered by certain factors and this is not limited to Iran. For instance, we had people who were interested to visit Turkey. However, they have lost their interest due to Turkish President Recep Tayyip Erdoğan’s wrong policies.

However, as for Iran, one should note that most of those interested to visit the country have, despite climatic issues, always wanted to make a trip to the country because Iran is a good place for tourists. Iranians show special hospitality toward foreigners. Moreover, Iran’s political situation and its position on different issues have not changed, either. Given the drop in the value of the rial inside Iran, it would be very economical for foreign tourists to visit Iran. This issue along with the country’s climatic and cultural diversity seems to draw many European tourists to Iran in the coming years.