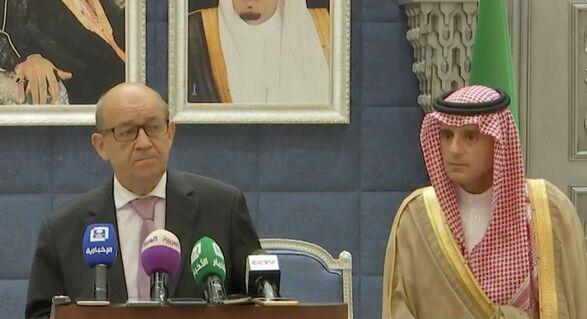 Iranian Foreign Ministry Spokesman Bahram Qassemi says the concerns raised by French foreign minister about Iran are fabricated, unfounded and hostile and will not help resolve any of the regional crises.

In a Thursday statement, Qassemi slammed the anti-Iran remarks made by French Foreign Minister Jean-Yves Le Drian during his recent visit to Riyadh.

“Your voicing concern is not compatible with the realities in the region and amounts to barking up the wrong tree,” said Qassemi in response to the comments that Le Drian made in a joint press conference with his Saudi counterpart in Riyadh.

“[The fact] that some officials from countries beyond the [Middle East] region have travelled to the Persian Gulf region and once again expressed their fabricated, unfounded and hostile concerns about Iran, while turning a blind eye to the existing and very clear realities in the region and while being swayed by the [false] suggestions of delusional and warmongering Saudi officials, will not help settle any of the crises definitely and obviously fueled by Saudi Arabia, and will not even help this country weather the domestic and regional crises it is grappling with,” said Qassemi.

arms are used in the devastating war on Yemen and their support for Saudi Arabia and its allies in the region have only emboldened Riyadh to create more crises and complicated and intensified instability and insecurity in this sensitive region of the world,” Qassemi noted.

“Unfortunately, it seems that France has a unilateral and biased look at the crises and human catastrophes in the Middle East, and such an approach, intentionally or unintentionally, contributes to the realization of potential crises,” he said.

“The current situation in the region and the need to boost and expand stability and security together with the fight against terrorism to further destroy it entail pragmatic and responsible words and deeds by other countries’ officials,” the spokesman noted.