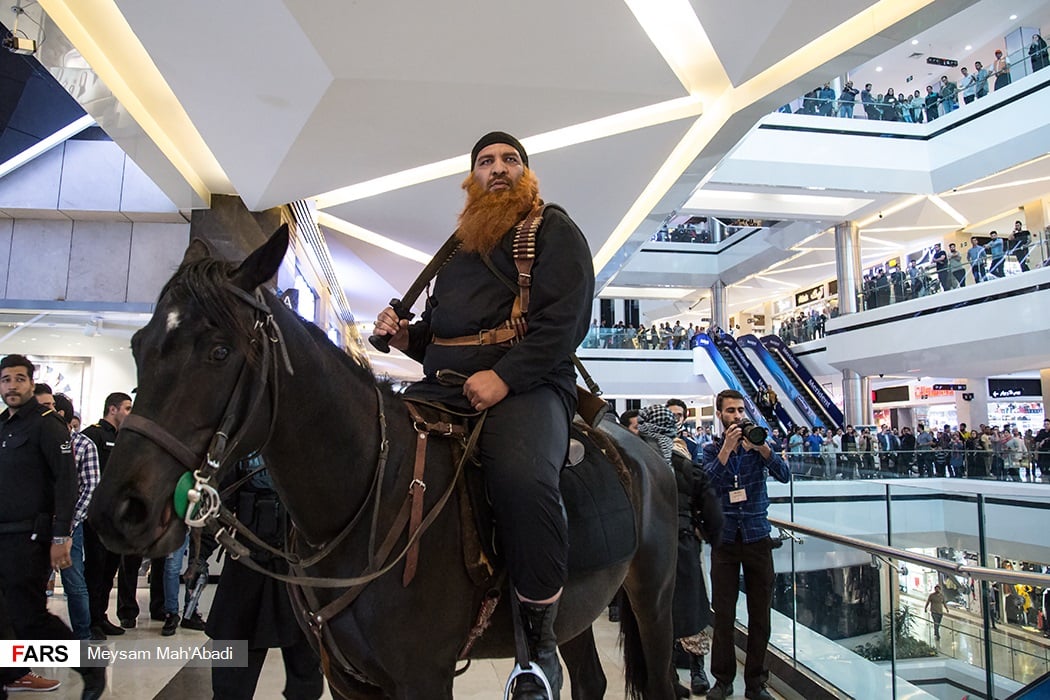 Shoppers and cinemagoers in a major mall in central Tehran were terrified to death on Monday night when they saw a group of ISIS terrorists, with guns and horses, entering Kourosh Mall and Cineplex, shouting “Allahu Akbar”, and intimidating the citizens.

They, however, were not real terrorists. They were a group of actors dressed in ISIS militants’ costumes and were there to promote the film “Damascus Time”, an Iranian movie about the Islamic Republic’s fight against terrorism in Iraq and Syria.

The weird stunt immediately sparked harsh reactions among the people there and shocked the social media users who later watched the footages.

A clip filmed by one of the people inside the shopping mall shows a parent shouting at the ISIS-like actors, asking them, “What if a woman or a child is shocked by your freaky show here? Who is responsible for such a stupid move? Who the hell did tell you to dress up like this?”

After thousands of tweets and posts in various social media to criticize the move, Ebrahim Hatamikia, the director of the film, issues a statement and said he was unaware of the promotion, and sincerely apologizes to all those hurt and scared by the show.

“I thought a person with red beards (like ISIS militants) is going to stand outside the mall and let the fans take selfies with him. I didn’t know there would be horses, screams, and crowds inside the mall.”

“The show was definitely beneath the dignity of my film,” he added.

Damascus Time, shot in Iran and Syria, stars Hadi Hejazifar, Babak Hamidian and a number of Syrian and Iraqi actors.

It tells the story of an Iranian pilot and his son as co-pilot who are seized by ISIS forces in Syria when are in the country to deliver a cargo of humanitarian relief supplies to people in a war-torn region.

The film was produced by the Owj Arts and Media Organisation, an institution based in Tehran, producing revolutionary works in art and cinema.