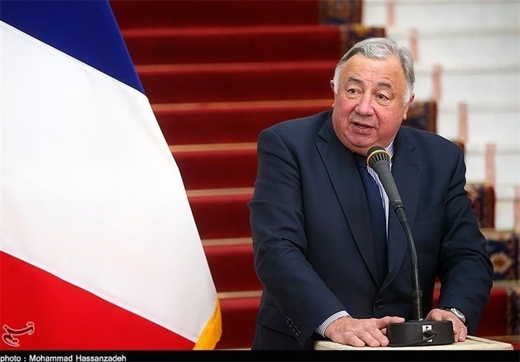 The French top senator noted that the upcoming visit to France by President Hassan Rouhani can provide an opportunity for the two countries to better focus on bilateral ties.

President of the French Senate Gerard Larcher reiterated the necessity for close cooperation among key regional players to end the threat posed by terrorism.

Speaking after a meeting with Ali Akbar Velayati, an advisor to the Supreme Leader of the Islamic Revolution Ayatollah Seyyed Ali Khamenei in Tehran on Sunday, Larcher said he and Velayati exchanged views on developments in Iraq, Syria and the entire region.

He also said that the recent resolution by the UN Security Council on Syria was another major issue discussed at the meeting.

Larcher noted that they also understand the two countries’ views on planning counterterrorism measures, and added, “There are many dangers in the West Asia region, and cooperation among regional and global powers can be a solution to the issue (terrorism).”

He further noted that the upcoming visit to France by President Hassan Rouhani can be an opportunity for conferring on bilateral ties.

Addressing a joint press conference with his Iranian counterpart Ali Larijani here in Tehran, Larcher noted that Rouhani will pay an official visit to Paris on January 27 and 28.

Rouhani was due to travel to France in late November but put off the trip following the November 13 attacks in Paris that left 130 people dead.