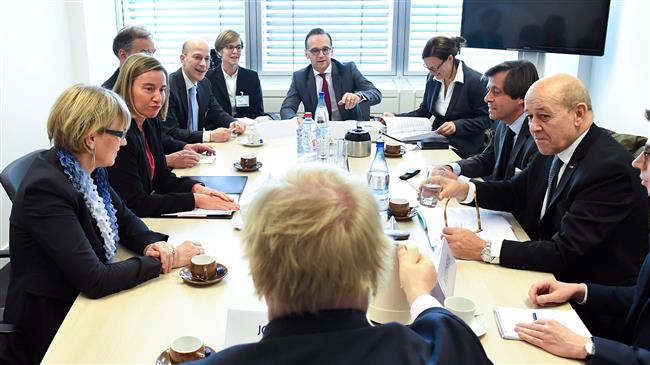 The European Union foreign ministers have failed to agree new sanctions against Iran as London, Paris and Berlin seek to appease US President Donald Trump, who has threatened to pull out of the landmark Iran nuclear deal.

In a meeting of the EU foreign ministers in Luxembourg on Monday, Britain, France and Germany proposed expanding sanctions against Iran over its alleged ballistic missile program and its role in regional conflicts, particularly Syria and Yemen.

They hoped that the expansion of sanctions against Tehran can help convince the US president not to follow through on his threat to walk away from the nuclear agreement, officially known as the Joint Comprehensive Plan of Action (JCPOA).

Trump is a stern critic of the nuclear deal reached between Iran and the five permanent members of the UN Security Council — the United States, France, Britain, China, Russia – plus Germany. Under the agreement, nuclear-related sanctions put in place against Iran were lifted in exchange for curbs on Tehran’s nuclear program.

The US president on January 12 reluctantly agreed to waive sanctions against Iran that were lifted as part of the landmark deal, but threatened to withdraw from the accord if some “disastrous flaws” were not fixed.

He said he wanted America’s European allies to use the 120-day period before sanctions relief again came up for renewal to agree to tougher measures and new conditions; otherwise Washington would pull out of the deal.

Danish Foreign Minister Anders Samuelson said “a very broad majority” was in favor of fresh sanctions, as the clock ticks down to Trump’s May 12 deadline.

Speaking after the Luxembourg discussions, Irish Foreign Minister Simon Coveney also said it is needed to “send a strong signal to Iran that we’re concerned in relation to some of their activity particularly in Syria.”

“But also to send a message to Washington that we share their concerns in some of those areas,” Coveney added.

An EU diplomat said new sanctions could direct both Iranians and also non-Iranian forces in Syria.

Iran has repeatedly dismissed Western allegations about its regional presence, saying it is offering help to countries in the region in the fight against terrorism based on their requests.

Any decision on Iran sanctions requires unanimous support from all EU members but several states, including Italy and Sweden, have not been convinced yet.

The EU is eager to safeguard the nuclear accord. A diplomat from one of the three European powers said the bloc still had four weeks to go, adding, “We are clearly heading there, though we need a bit more time.”

The bloc’s foreign ministers agreed to continue work on the matter in the coming days and weeks. “The issue remains on the agenda,” said Germany’s new Foreign Minister Heiko Maas.

Speaking to reporters on Monday ahead of the Luxembourg meeting, EU foreign policy chief, Federica Mogherini, reiterated the bloc’s strong and unequivocal commitment to the full implementation of the JCPOA by all sides, saying preserving the deal is vital.

French President Emmanuel Macron and Germany’s Chancellor Angela Merkel plan to make separate official visits to Washington before May 12 in part to lobby Trump on the issue.