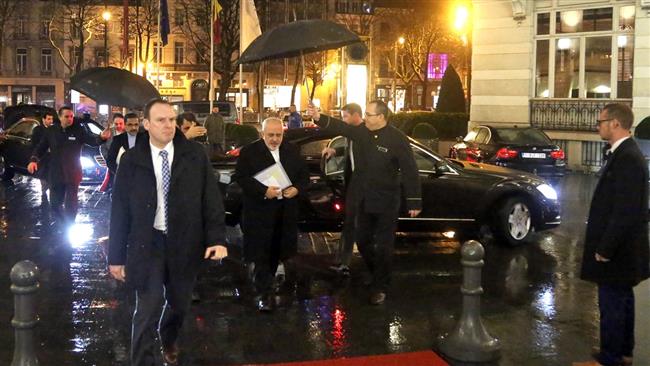 Iranian Foreign Minister Mohammad Javad Zarif has dismissed as “propaganda” claims by certain regional countries that they might deploy troops to Syria, saying no outsider can make decisions for the conflict-stricken country.

“It is obvious that these remarks are more of propaganda slogans. The means and capabilities of countries are completely clear and with these propagandist bluffs, none of their problems will get resolved,” Zarif said upon his arrival in Brussels early on Monday to discuss key regional issues with European Union officials.

However, such claims will further escalate tensions in the Middle East region, Zarif warned.

The top Iranian diplomat called on the neighboring countries to see the realities on the ground, “set aside illusions,” and stop imposing their will on the Syrian people.

It is up to the Syrian people to decide their future, he said.

Zarif’s comments came as Saudi Arabia and Turkey have in recent weeks raised the possibility of launching ground operations inside Syria.

On February 12, Saudi Foreign Minister Adel al-Jubeir told CNN that Riyadh is ready to deploy special forces to Syria if the US-led coalition decides to send ground troops. The so-called coalition has been conducting combat sorties against purported positions of Daesh in Syria since September 2014.

Turkish Foreign Minister Mevlut Cavusoglu has said Ankara and Riyadh could launch ground operations in Syria “if there is a strategy.”

Saudi Arabia and Turkey are widely believed to be among major sponsors of terrorist groups operating against the government of Syrian President Bashar al-Assad.

The idea of Riyadh’s possible participation in ground operations in Syria was first raised on February 4 by Ahmed Asiri, a spokesman for the Saudi Defense Ministry.

Bahrain and the United Arab Emirates (UAE) also followed in Saudi Arabia’s footsteps and hinted their preparedness for similar deployments.

Swiftly welcomed by the United States, the proposal was met with strong criticism from Syria and its allies.

Damascus has issued warnings against any such move with Foreign Minister Walid al-Muallem saying that any “ground intervention on Syrian territory without government authorization would amount to an aggression that must be resisted.” He has also warned that potential aggressors would return home in a “wooden coffin.”

The development comes as Syrian troops, backed by Russian air raids, have been making gains against foreign-backed militants.

The Syrian president has said the government forces will retake the entire country from terrorists. Assad on Friday warned that the involvement of regional countries in the conflict meant that the process to liberate Syria would take a long time.

For nearly five years, Syria has been grappling with a foreign-backed militancy. According to a new report by the Syrian Center for Policy Research, the conflict has claimed the lives of some 470,000 people, injured 1.9 million others, and displaced nearly half of the country’s pre-war population of about 23 million.

Elsewhere in his remarks, Zarif said that Iran and the European Union (EU) will begin an “all-out cooperation” in different arenas.

He added that high-level talks between the two sides have already begun and that they will continue at the ministerial level in the upcoming trip to Iran by EU Foreign Policy Chief Federica Mogherini.

Zarif said a significant breakthrough has been made on the implementation of the nuclear agreement between Iran and the P5+1 group.

During his two-day visit, Zarif is expected to sit down with Belgium Prime Minister Charles Michel as well as a number of other EU officials, including the EU foreign policy chief, European Parliament President Martin Schulz and European Council President Donald Tusk.