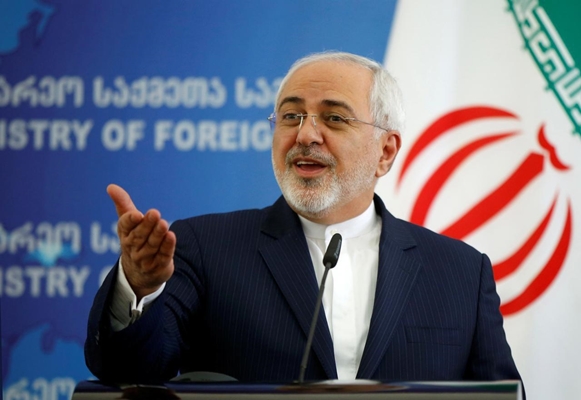 Iranian Foreign Minister Mohammad Javad Zarif says the US sanctions imposed against him will fail to silence his voice.

“The US government’s move to put my name on the sanctions list shows their deep hatred of Iran’s diplomacy and the understandable way in which the Islamic Republic of Iran expresses its viewpoints to the international community,” Zarif said in an interview with the Iran newspaper.

“The Americans believe this sanction can silence me. By God’s grace, they have failed to do so, so far,” he said.

“American journalists and even TV presenters cannot wait to interview me either in Tehran or in Europe. As you saw, two weeks ago I travelled to four countries all of which are either the United States’ military allies or have very close relations with this country and are among Washington’s NATO allies, and the trips continued,” he added.

“I mean I don’t have enough time; If I had, I would have travelled to many other locations. This trend shows the international community has turned a blind eye to the sanctions imposed on me,” Zarif said.

“We can present the country’s official points of view using different methods. This method could be one which is warmly welcomed inside the country, but which is abused by ill-wishers abroad more than it can serve the interests of Iranian people,” he added.

“Because such a method is popular, many of our friends use it,” he noted.

“Also, there is another method which may not be welcomed in the country, but which could help you influence the viewpoints of the other party,” the foreign minister said.

“Although many people in the country criticized my way of holding talks, I tried to choose a method of dialogue outside the country that would be beneficial for realizing the country’s national interests,” he added.

“I think what bothers conservative groups in the United States most is this very method of dialogue that I used. It prompted them to make threats first, and impose sanctions on me afterwards,” the top diplomat noted.

He also touched on the reaction to the US move by diplomatic officials in different circles and in his private meetings.

“First, when the Americans themselves announced it and said the president had ordered sanctions to be imposed on Zarif and that they would slap the sanctions by week’s end, but later, the came under so much pressure and stopped short of imposing sanctions,” he said.

“Mr Pompeo officially announced that Iran’s foreign minister comes here and easily talks to our reporters. He (Pompeo) does not realize that in the world of communications, I can even sit in my home and talk to American journalists, unless they want to violate the basic principles of their own country, and I believe the American community is unlikely to allow them to do so,” said Iran’s foreign minister.

“And when I went to New York, US authorities came to me and said Mr Trump had invited me to the White House to have a meeting with him. At the same time, they said it was decided to put my name on the sanctions list in a matter of two weeks. Of course, they didn’t link these two subjects to each other that much,” he said.

“My interpretation was that if I go talk to him, the minimum outcome would be that I wouldn’t be put on the sanctions list; however, our authorities do not approve of holding talks with American officials at a time when they do not pay much attention to the results of previous negotiations,” Zarif noted.

“Of course, if [Iranian officials] had ordered me to do so, I would have definitely done it despite the fact that such a meeting would incur much domestic pressure,” said the top diplomat.

“But such a move (meeting Trump) was against the policies of the Establishment and the country, and I wouldn’t deem it useful, either, given the circumstances as they had made threats along with giving an offer of talks,” he noted.

The foreign minister further weighed in on some individuals believing that the United States’ recent move amounts to the failure of diplomacy and the option of dialogue.

“Look at the reality in the world. Now, it is the US that has failed, and it is diplomacy that has won,” said the top diplomat.

“Our friends are of the opinion that the United States is the biggest adversary of our country and revolution, but they should see whether or not they were put under sanctions all those years when they chanted slogans against the US and opposed diplomacy. Did the US take any action against them? Was is because the US was scared of them that it did not slap sanctions on them?” he said.

“I don’t like to blow my own horn, but the fact that no sanctions have been imposed on those shouting anti-US slogans shows Washington has no problems with them and what they do is not problematic for the US,” he said.

“[But] What we did created major problems for the United States,” he added.

“Diplomacy has been very successful not because of our extraordinary capabilities, but because our people were efficient,” said Zarif.

“Our people laid the groundwork for us to stand up to 6 major powers and make the Americans feel they have suffered a blow and say this has been the worst deal in history …,” he noted.

Sanctions on Me Show I Had Not Been Pursuing US Policies

He then touched upon reactions inside the country to the performance of the Ministry of Foreign Affairs as well as the Iranian state radio and TV’s way of covering relevant news.

“Unfortunately, the programs produced at the state radio and TV are not aimed at reviewing foreign policy; rather, they are aimed at dealing a blow to it,” said Iran’s diplomacy chief.

“They must have thought that it would be in their best interests to portray it as a weak point of the Establishment when Iran’s foreign policy secures achievements in the world and when the Zionist regime [of Israel] regards me as a thorn in its eye,” he said.

“This is a lack of appreciation of national pride and dignity. If I were them, I would try to downplay the foreign minister’s errors, not to turn the Foreign Ministry’s accomplishments into errors and hunt the paper tiger every day and tell the people that you should know your foreign minister or diplomacy apparatus has fallen behind the world and retreated, and is not doing well in the world, and that it is others that are deceiving your Foreign Ministry,” he said.

“All around the world they usually try to show that they are doing well, not to launch a smear campaign against their officials,” Zarif explained.

“Now, the whole world is saying that the Islamic Republic of Iran’s diplomacy has been successful; Mr. Trump himself says he has watched two minutes of the Iranian foreign minister’s interview and believes the US delegation won’t be able to handle talks with him,” he added.

“The same Mr. Trump who has said the US has spent $7 trillion in the region and still failed is saying that the JCPOA was a major deception for the US,” said Zarif.

“We accept part of Trump’s comments, but regard the other part as untrue. Go see for yourself that the whole world is saying that Iran was successful with regards to the JCPOA,” he said.

“I don’t know how long these folks are going to question the achievements of the country. If [as some people say] I had been pursuing the Americans’ line, then why did the US slap sanctions on me?” he asked rhetorically.

“If [as some people say] I had been enforcing the United States’ orders, then why were they (those criticizing Zarif) not put under sanctions and why were sanctions imposed on me, only?” said Zarif.