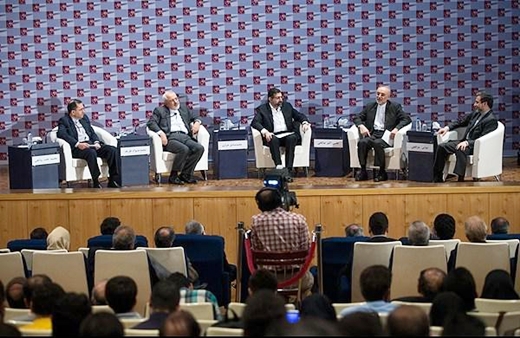 FM Zarif said since the conclusion of the deal on July 14, there has been a major change in the way other countries deal with Iran over its nuclear program.

The massive turnout of Iranians for the presidential election in 2013 dissuaded the other side from seeking to impose its will on the Iranian people and thus led to a breakthrough in nuclear talks with six world powers in Vienna, Foreign Minister Mohammad Javad Zarif told a special gathering to review the nuclear deal in Tehran on Sunday.

He said the text of the Joint Comprehensive Plan of Action is a balanced one because both sides found a happy medium in it as far as their demands were concerned.

The top diplomat further said all the sanctions the UN Security Council has imposed against states and nations have resulted in either regime change or war, because they are basically designed to drive a wedge between the public and the establishment. “In Iran’s case, though, a 73 percent turnout [in 2013] told the world that sanctions do not work. Our people told the world that they interact with their government through the ballot box.”

Zarif went on to say that Iran’s case at the UN Security Council will be declared closed after a 10-year period, adding that unlike previous UN Security Council Resolutions which banned other nations from cooperating with Iran in the nuclear field, Resolution 2231 encourages countries to cooperate with Iran on its peaceful nuclear program.

In conclusion, Foreign Minister Zarif said since the conclusion of the deal on July 14, there has been a major change in the way other countries deal with Iran over our nuclear program.