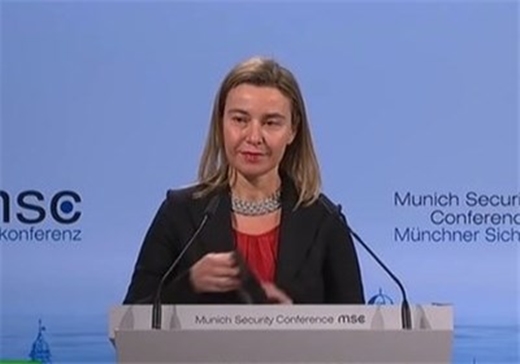 The EU foreign policy chief has underlined that Iran and P5+1 should seize the opportunity in nuclear talks to reach a comprehensive deal.

Speaking in the 51st Munich Security Conference on Sunday, Mogherini pointed to the ongoing talks between Iran and P5+1 (the five permanent UN Security Council members plus Germany) and said, “We cannot lose the opportunity.”

She further commented on the deadline for a nuclear deal between the two sides, and said, “Not much time is left. Now is the time to show a strong political will… now we are at a critical stage.”

Earlier in a meeting with Iranian Foreign Minister Mohammad Javad Zarif on Saturday, Mogherini said that P5+1 has “strong political determination” to strike a deal with Iran.

She also noted that the long-awaited accord will have positive effects on the regional developments.

Iran and the six nations (alternatively known as E3+3) are in talks to hammer out a final agreement to end more than a decade of impasse over Tehran’s peaceful nuclear energy program.

Iran and the six powers look to reach a framework agreement in March and a final long-term deal by June 30.

Following an interim nuclear deal signed in Geneva in November 2013, two deadlines for a final, comprehensive deal have been missed, and now a third one is looming on July 1.