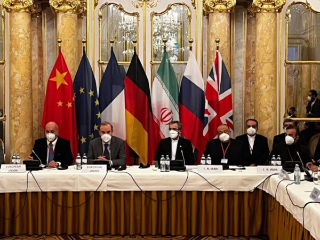 An Iranian foreign ministry official says one of the major challenges during the recent talks in Vienna has been the Europeans’ willingness to act in favor of the United States’ will.

The official was quoted by ISNA as elaborating on the latest developments pertaining to negotiations in Vienna between Tehran and other signatories to the 2015 Iran nuclear deal known as the Joint Comprehensive Plan of Action (JCPOA).

“Although the Iranian negotiation team’s approach has been based on interaction and flexibility since day one, unfortunately the three European countries do not have enough freewill to make decisions,” said the official.

“It is clear that the Western sides, which came to Vienna under the delusion that they would give minimum concessions and get maximum concessions, were not fully satisfied with Iran’s proposed documents and clear demands,” he said.

“However, none of these countries could find fault with these legal texts or described them as being contradictory to the JCPOA,” said the official.

As the foreign ministry official noted, the Europeans said they were not ready to offer the benefits clearly stated in the JCPOA.

“The most important challenge to making headway with the talks is the United States’ reluctance to fully lift sanction,” he said.

“We believe whenever the US abandons its ‘maximum pressure’ campaign and the Europeans show the necessary political will in the negotiations, then a path will open to rapidly reaching an agreement,” the official explained.

He said Iran believes the draft proposals it has submitted to the other parties are negotiable, and added Tehran has urged the other sides to the talks to present their clear texts and proposals based on “common principles and within the framework of the JCPOA.”

“One of the points stressed during talks with the other side is that all sanctions imposed within the framework of the ‘maximum pressure’ policy clearly aimed at eliminating the JCPOA must be lifted; so, all sanctions are related to the JCPOA,” he said.

“As long as this issue is not settled, other issues cannot be finalized,” said the official.

“The method and timing of verification as well as issues related to the US giving guarantees that it won’t withdraw from the deal again are among the topics to be discussed as talks continue,” he said.