EU Serious in Promotion of Agriculture Ties with Iran 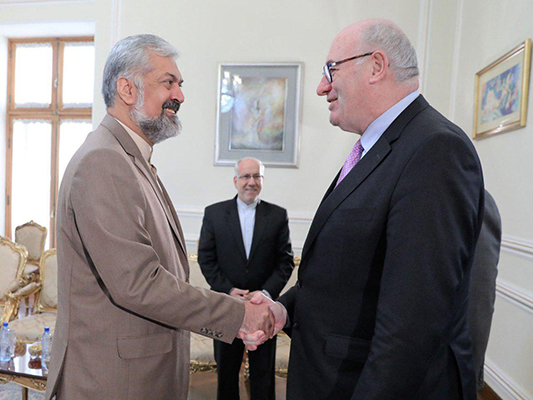 The European Union's Commissioner for Agriculture and Rural Development Phil Hogan says the EU is determined to expand its ties with Iran in all fields, particularly agriculture and food products.

Hogan, who is in Iran at the head of a high-ranking economic delegation, discussed issues of mutual interest with Iranian Deputy Foreign Minister Morteza Sarmadi at the Iranian foreign ministry’s building.

During the Monday meeting, Hogan stressed the necessity of removing obstacles to banking relations, and said, “The EU has already tried to encourage European banks to establish relations with Iran, and will continue to do so.”

“The EU is serious in further development of its relations with Iran in all fields including agriculture and food products.”

He also pointed to EU Foreign Policy Chief Federica Mogherini’s visit to the US, which was aimed at convincing senior US Congressmen to back the nuclear deal.

“Regardless of what the US president says, the EU will continue to encourage the country to implement the JCPOA,” he added.

Sarmadi, for his part, referred to Iran-EU relations after the Joint Comprehensive Plan of Action (JCPOA), and underlined the need for immediate resolution of banking problems.

“We expected the EU to not only support the nuclear deal, but also encourage all parties to live up to the deal and refrain from spoiling the atmosphere of business and economic ties with Iran,” he added.