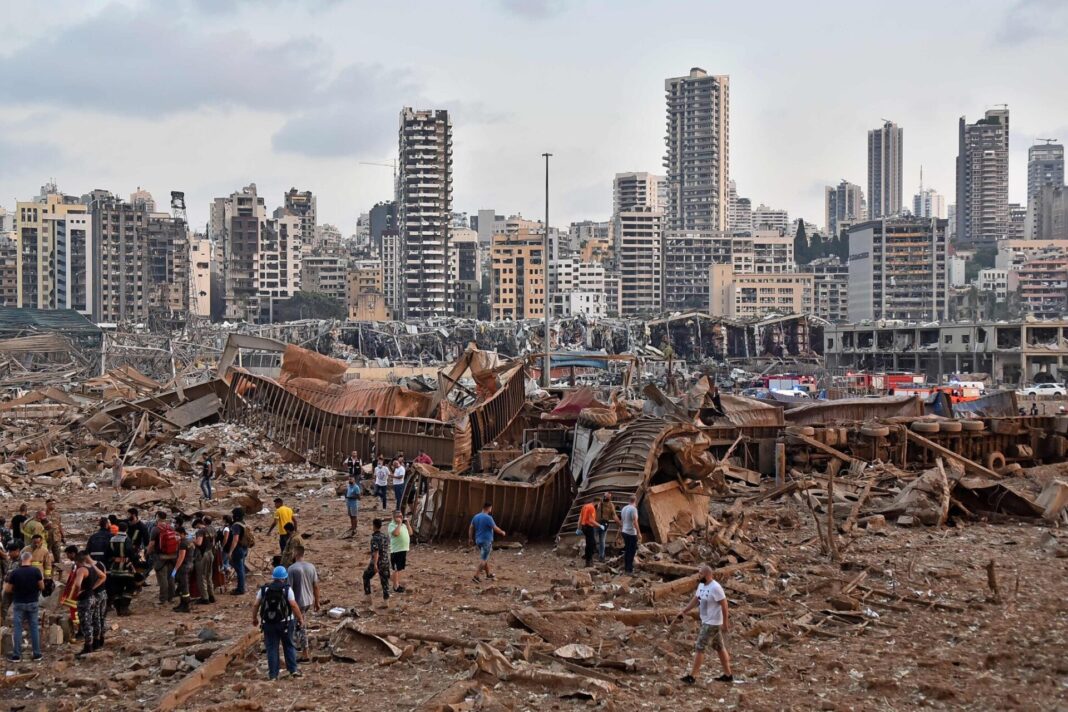 The European Parliament has adopted a resolution calling for the EU to adopt targeted sanctions on Lebanese officials said to be engaged in corruption and obstructing the Beirut Port explosion investigation.

In a vote on Thursday, 571 out of 681 members of European Parliament backed the resolution, which condemned Lebanese political parties for the country’s devastating economic crisis, which has plunged about three-quarters of the population into poverty and for delaying any semblance of economic recovery and accountability.

The resolution, spearheaded by parliamentarian Christophe Grudler, who belongs to the Renew Europe bloc, urged the EU to maintain pressure on political leaders in Lebanon, where a government was formed last week following more than a year of political deadlock.

“We know who is responsible for the political and the economic crisis: all factions, most ministries, many corrupted MPs,” Grudler told Al-Jazeera, adding, “We are writing black and white what everyone in Lebanon knows.”

The resolution notably condemned the rejection of an IMF-approved bailout plan presented by the previous Lebanese government.

It said Lebanese legislators and political leaders rejected the plan as a result of “vested interests in preserving the interests of Lebanon’s banks”, and stalled a forensic audit of the Central Bank while its governor, Riad Salameh, is being investigated by France for money laundering.

The resolution also slammed officials for obstructing the Beirut Port explosion investigation, and echoed calls from international rights groups Human Rights Watch and Amnesty International, and from some victims’ families, for an international and independent fact-finding mission.

In late July, the EU adopted a legal framework to sanction Lebanese officials engaged in corruption, stalling of economic and accountability reforms, as well as obstructing government formation.

Lebanon last week formed a full-fledged government for the first time in over a year under Prime Minister Najib Mikati.

Grudler noted that all eyes are on the Beirut Port explosion investigation and the economic recovery process.

“We call on all EU Member States, and the UK and Switzerland, to work together and put on the EU sanctions list the names of high-level corrupted politicians, who obstruct the investigation of the explosion, who obstruct the recovery plan,” Grudler said, adding, “We have to freeze the assets and ban the travel of key political figures, at the EU level. We have to listen to the Lebanese people.”

The resolution also called for general elections to be held on time in May 2022 and the creation of an international humanitarian task force under the auspices of the United Nations to ensure that aid distribution is effective and protected from political patronage networks, in order to improve donor confidence.

The resolution is a departure from previous softer efforts to lobby Lebanese officials.

Following the devastating Beirut Port explosion in August 2020, French President Emmanuel Macron has tried to press Lebanese officials into resuming talks with the IMF, and implementing economic reforms, but to no avail.

Imad Salamey, associate professor of Middle East political affairs at the Lebanese American University, says the strongly-worded resolution from Europe is an attempt to “reassert its negotiation leverage and position of power”.

“I think, in general, the European Union led by France in particular … is trying to display a strong stance and ability to penalise those who defy its guidance,” Salamey told Al-Jazeera.

“It also sends a strong message to Lebanese politicians that Europe remains a key player and has not evicted the country to the interests of Iran or Syria,” Salamey added.

The Lebanese government has yet to comment on the resolution.

Schams El Ghoneimi, political adviser for the Renew Europe bloc in the European parliament, told Al-Jazeera that the resolution could signal a potential EU policy shift towards Lebanon.

“We went from statements calling for reforms to an EU sanctions regime against those who obstruct anti-corruption reforms in Lebanon,” he continued.

The resolution could create the political space for European countries to take more hardline stances and measures against the Lebanese authorities for corruption, and for stalling reforms and accountability mechanisms, he added.