The Italian head coach of Iran’s Esteghlal Tehran Football Club, Andrea Stramaccioni, has finally received part of his overdue salary payments after the representative of an Iranian bank gave him a check at Iran’s Embassy in Rome.

Stramaccioni, who previously managed Inter Milan, Udinese, Panathinaikos, and Sparta Prague, had stepped down as the head coach of Esteghlal FC over the club’s failure to transfer his salary over the US sanctions.

Finally, on Monday, the Italian coach went to the Iranian Embassy in Rome and received a check from the representative of Bank Sepah of Iran.

Stramaccioni managed to receive a check of €159,500 under the auspices of Iran’s Embassy in Rome, and has vowed to return to the country by Tuesday night.

The sum of money will be added to Stramaccioni’s bank account in Italy within the next couple of days. 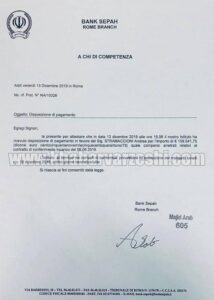 While Esteghlal FC rose to the top of Iran’s premier league under Stramaccioni’s stewardship, the US sanctions against the Islamic Republic obstructed the process of his salary payment, as Iranian banks have been prevented from carrying out international transfers.

Due to such problems, the Iranian football giant had been forced to transfer the salary of its head coach money through multiple bank accounts, belonging to several individuals in Europe. This reportedly led to the partial closure of Stramaccioni’s bank account in Italy over money laundering charges.

Although all international sports organizations, including the governing body of football (FIFA), insist on the separation of sports and politics, the US sanctions against Iran –imposed under the policy of maximum pressure on Tehran- have adversely affected the lives of ordinary people and have even had a damaging impact on the popular sport, football.

Apart from the head coach of the popular Iranian football club Esteghlal, a number of other foreign coaches have already had troubles with their payments in Iran because of the US sanctions, including the Belgian manager of the Iran national football team “Marc Robert Wilmots” and his Portuguese predecessor “Carlos Queiroz”.

The far-reaching impacts of the US sanctions that have even affected the athletic activities come against a backdrop of expression of support for the Iranian people from the American officials.

While the White House claims to be advocating the people of Iran, the US sanctions have practically deprived millions of young Iranians of the joy of football, known as one of the basic citizenship rights.

The US’ anti-human policy of “maximum pressure” on Iran and the cruel sanctions have targeted not only the medical and health sector in Iran, but have caused damages to the mental health of the Iranian citizens.