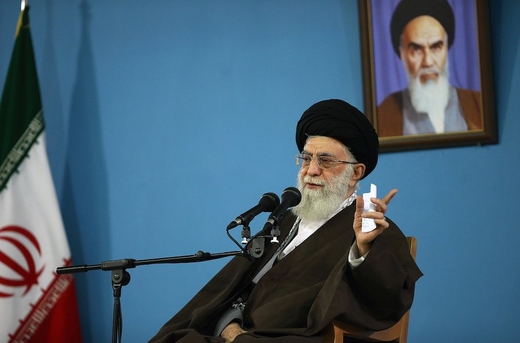 Leader of the Islamic Revolution Ayatollah Seyyed Ali Khamenei says enemy has failed to prevent people’s allegiance to the Islamic establishment with pressure during the past 37 years.

Ayatollah Khamenei made the remarks in an address to thousands of people from the central city of Najafabad on Wednesday.

The Leader said enemy is attempting to create a “false bipolarity” in Iran like “pro-government and anti-government parliament.”

He said the Iranian people will stand up to enemy plots by voting in the upcoming elections.

“When enemy witnesses that after 37 years [since the victory of the Islamic Revolution], [and] with all [kinds of] pressure, cruel sanctions and spiteful and damaging propaganda, it has failed to prevent people’s allegiance to the establishment,” it comes to realize the grandeur of the Islamic establishment, Ayatollah Khamenei said.

The Iranian people want a parliament that pays due heed to the country’s independence and dignity, is committed and courageous and will not fall for enemy plots, the Leader noted.

Ayatollah Khamenei further warned against enemy schemes to infiltrate into the country, calling on the nation to remain vigilant in the face of enemy plots to “create discord” in the country.