Leader of Iran’s Islamic Revolution Ayatollah Seyyed Ali Khamenei warned of enemy plots to sabotage Iran’s upcoming elections, but at the same time noted that no superpower can do a damn thing in the face of an establishment connected to its people.

Speaking in a Wednesday meeting with a group of Army commanders and personnel in Tehran, Ayatollah Khamenei warned that “the enemies make provocations to sabotage the elections.”

“The nation should proceed along in the face of the hostile movement, while maintaining its current awareness so the elections will be held with vibrancy, passion, neatness and security,” the Leader added.

“Bluster is the modus operandi of big powers. The worse situation for a country comes about when its authorities start to become afraid of the enemy’s sulk, threat and bluster,” the leader said, adding, however, that “the nation is standing upright.”

Ayatollah Khamenei further said the nation’s resistance has been the key to thwarting different enemy plots against the country over the past decades, Press TV reported.

“Either the US or bigger [entities] than that cannot do a damn thing in the face of an establishment, which is connected to its people, likes its people and is liked by them,” the Leader added.

The Leader further emphasized, “The very election of such nature would lend much security to the country.”

Over a dozen high-profile figures have registered for the country’s 12th presidential elections.

The registration process is over and the people will go to the polls on May 19. Concomitantly, the electorate will vote to choose members of village and city council. 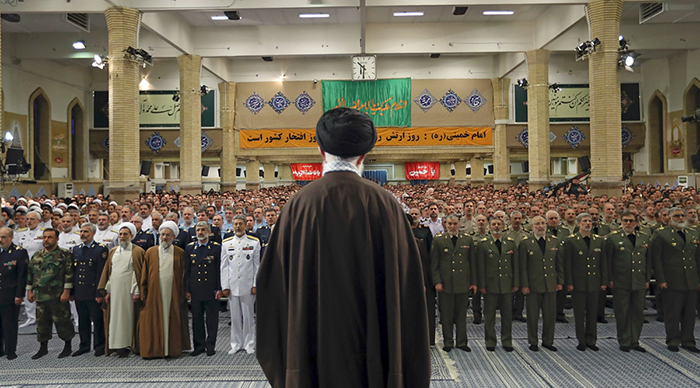