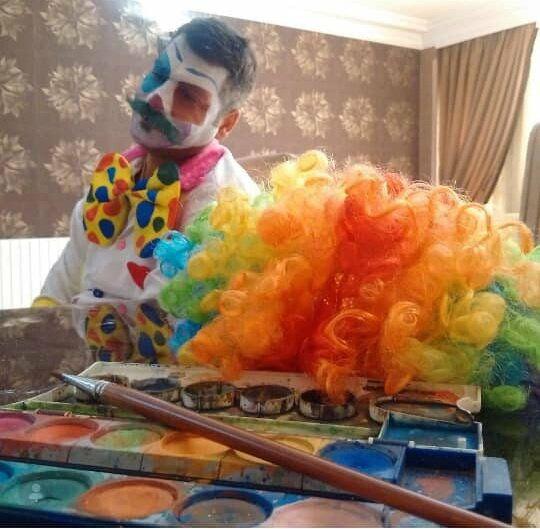 An Iranian electrical engineer accompanied by his friends and wearing a clown’s outfit goes to children’s wards at hospitals to make them laugh.

Hossein Ebadi lives in Mahshahr in southern Iran. He used to work at the road rescue unit of the Red Crescent Society years ago, which triggered him to change his perspective on life.

“I also do theatre work, mostly satire. It was around five or six years ago when a friend of mine, Iman Barshidi, suggested we become clowns and go to hospitals as doctors with subspecialty in ‘laughter’ to make children laugh,” he says.

“We took the first step at the children’s ward of a hospital and gradually got to establish a relationship with these kids,” he adds.

“I feel well when I am with the kids. They make me well. Until three years ago, no one knew that I was a clown! My friends and family got to realize that I was doing this very late,” he says.

“Through all these years, we clowns have only wanted to make these kids happy and soothe their sufferings for a few minutes, so that they will forget everything for a short period of time and become happy,” he noted.

“At times, I think to myself that they make me well, but I can’t make them well,” he notes.
When asked if he has ever failed to make the kids laugh, he says, “Once I went to a Mashhad hospital which treats people suffering from burns. I did my job as usual, but was unable to bring smiles to anyone’s lips on that day. They were tough moments. They were in a lot of pain and couldn’t laugh easily. Their faces were bandaged up all over and they were twisting in pain. How would I make them laugh? Even one of the kids said: I don’t wanna laugh! Get outta here.’”

However, Ebadi has sweet memories, too, of the times he has made people laugh. For example, dressed as a clown, he once went to the house of a girl in Ahwaz who doctors had given up on.

“I would never forget Asma. I remember we had begun to act as a clown for her. Asma was a child who neither ate food nor walked. She was suffering from cancer and doctors had given up on her. Once other clowns and I went to her house and began singing songs together. I remember well that we sang ‘The Grandma’s House.’ We drew paintings together, laughed and danced. But what can be done? At the end of the day, she didn’t make it,” he says.

“On many occasions when I go to a hospital and make kids laugh, I hide myself in a closet afterwards and sob for one hour or more,” he says.

When asked if he has a sense of satisfaction with his life these days, he says, “A sense of satisfaction? I have never asked for anything in life. I don’t think about tomorrow. What only matters to me is to make it through the day until night. Who knows what tomorrow brings? I only thank God. I thank God for every single moment of my life.”